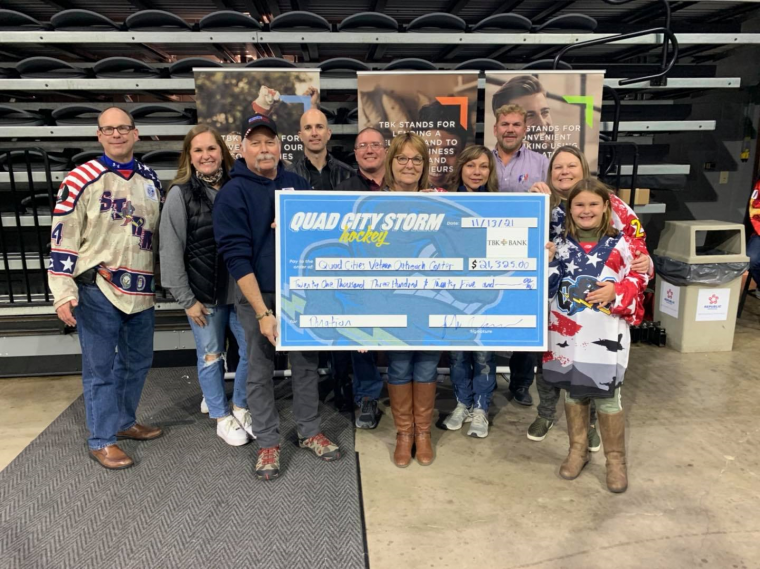 MOLINE, ILLINOIS (November 16, 2021) – The Quad City Storm extended its franchise record-winning streak to eight games this past weekend with a 4-3 win versus Peoria on Friday and a 4-1 win over the Evansville Thunderbolts Saturday.

Friday’s win came in the first home ice battle of the season in the Cold War on 74.  The visiting Rivermen scored first before David Brancik and Connor Fries notched first-period goals for the Storm, giving the home team a 2-1 lead at first intermission. Peoria regained the lead in the second period with a pair of scores from their captain, Alec Hagaman.

In period three, the Storm’s special teams shined, first with a tying-goal from veteran assistant-captain Joe Sova. On the power-play, Sova launched a long clearance-attempt behind the Rivermen net. A fortuitous bounce sent the puck off Rivermen net-minder Eric Levine and in to bring the game even at 3-3.

In the final seconds of regulation time, the Storm rushed up the ice, creating a four-on-two chance. Hagaman hooked Storm forward Shane Bennett to prevent him from receiving a pass and after Levine saved the Storm shot, he issued a blocker side-punch to the head of Storm defenseman Carter Shinkaruk. The hooking infraction and roughing minor gave the Storm a five-on-three power-play with twelve seconds remaining in the game.  The Storm won the ensuing faceoff, got a shot on net and forward Tommy Stang buried the rebound with six seconds remaining to set the final score at 4-3.

Saturday night, the Storm battled the Evansville Thunderbolts on Salute to Military Night. A season-high 3,060 fans piled into the TaxSlayer Center to see a commanding 4-1 victory, in which the Storm outshot the visitors 43-29. After a scoreless first period Quad City scored three straight goals from David Brancik, Filip Virgilli, and Tommy Stang. The goal for Virgilli was the first of his professional hockey career.

After recording the win Friday night, net-minder Bailey Brkin put on another impressive display, stopping 28 of the 29 shots he faced. After the game, the Storm and TBK Bank teamed up to raise $21,325 for the Quad City Veterans Outreach Center with a live jersey auction.

The weekend sweep pushed the Storm to a record of 8-1-0-1 and maintained their post of second place in the SPHL standings. Wednesday, the team hits the road for the longest road-trip of the weekend, playing the Birmingham Bulls Thursday night and the Pensacola Ice Flyers on Friday and Saturday.

The following weekend, the Storm kick-off and eight game homestand that begins November 26 and commences December 17. The dates for the homestand are as follows:

December 3: #ColdWarOn74 versus the Peoria Rivermen

Tickets for next weekend’s games can be purchased online at www.QuadCityStorm.com or at the TaxSlayer Center box office.