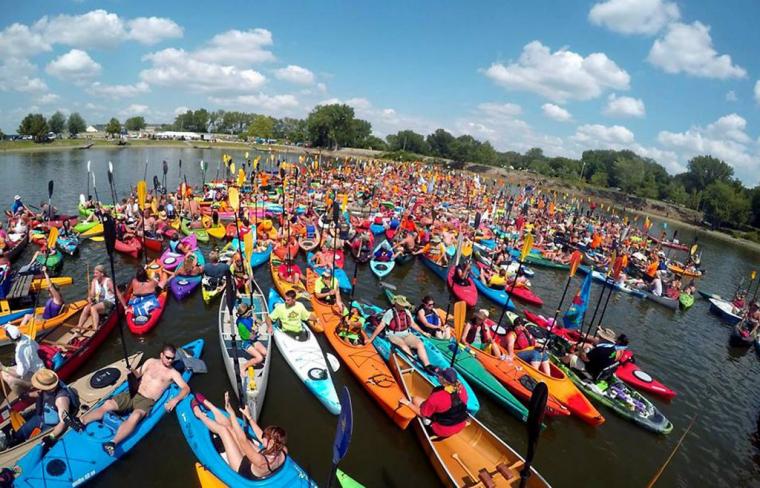 A day of outdoor fun culminating in an attempt to break a pair of Guinness World Records is set for August 17, when River Action hosts the 10th-annual celebration of paddle sports Floatzilla, with participants and spectators gathering at Rock Island's Sunset Park to see if the Quad Cities can boast the world's “Largest Raft of Canoes and Kayaks” and “Largest Simultaneous Kayak Launch.”

The current “Largest Raft of Canoes and Kayaks” record was achieved by One Square Mile of Hope (USA) in Inlet, New York, in 2014, with 3,150 attached crafts, and the “Largest Simultaneous Kayak Launch” record – also set in 2014 – is attributed to the New Hampshire Lakes Association for its launch of 396 crafts. Floatzilla registrants will attempt to top both watermarks when they covene at Sunset Park's Lake Potter at 2:30 p.m., taking part in the largest paddle-sports festival on the Mississippi River. The day also boasts live music, food and beverage vendors, a trade show, a group photo, a trophy for the largest paddling group, and a post-Floatzilla party, with registration $30 in advance and $35 on the day of the event.

Paddlers can launch their canoes and kayaks directly from Sunset Park's Lake Potter or from one of four additional sites along the Mississippi River. Launches from Moline's Bass Street YMCA and Bettendorf's Leach Park take place from 8 – 10 a.m., with voyages of roughly six-and-a-half miles. The launch from Davenport's Lindsay Park Yacht Club (9 – 10:30 a.m.) will begin at Mound Street Landing and include a five-mile paddle. And the launch from Davenport's Marquette Street Landing (9 – 11:30 a.m.) will feature a two-mile route with an estimated paddle time of one hour, with river crossing required.

A limited number of kayaks and canoes are available for rental through River Action, and for more information on the day's events, call (563)322-2969 or visit RiverAction.org or Floatzilla.org.