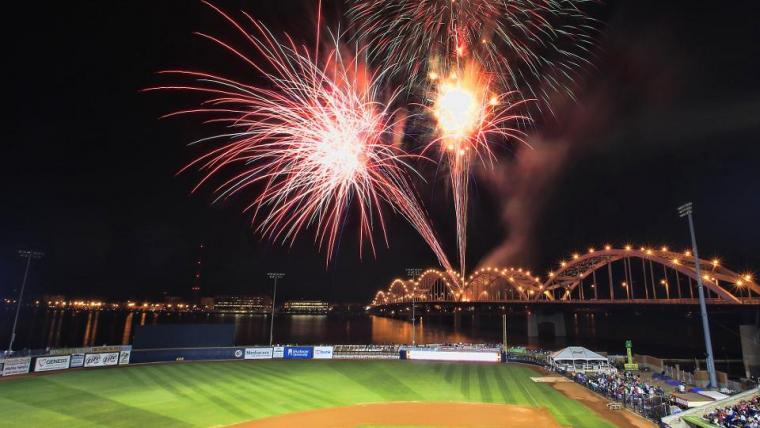 Annual explosions of fun will be taking place at both Davenport's Modern Woodmen Park and Rock Island's Schwiebert Riverfront Park when the Quad Cities hosts its Fourth of July celebration Red, White, & Boom!, the July 3 event delivering a spectacular fireworks display over the Mississippi River as well as live music, food and beverage vendors, special presentations, family programming, and more.

Beginning at 5 p.m. at Modern Woodmen Park, the baseball stadium will boast numerous children's activities including bounce houses at the First Baseline Party Plaza, with the popular reggae musicians of Rude Punch performing from 6 to 7:45 p.m. and again after the fireworks display. Davenport Mayor Frank Klipsch, Rock Island Arsenal officers, and Red, White, & Boom! sponsors will make a presentation at 6:30 p.m., and at 7:45 p.m., additional concert performances will be on hand via the 34th Army Band and the brass musicians of Scrap Metal.

Meanwhile, at Schwiebert Riverfront Park, the 5 p.m. festivities begin with inflatables (available with the purchase of a $5 wrist band), additional children's activities, the opening of the Bent River Brewing Company Beer Garden on the park's Great Lawn, and a Fourth-of-July proclamation and accompanying military tribute. The local band Country Couch Potatoes will take the Ellis Kell Stage at 5:15 p.m., followed by a 6:30 p.m. performance by the Metropolitan Youth Program Drill Team of Rock Island and a 7 p.m. set with the musical talents of Smooth Groove. The Schwiebert Riverfront Park boat docks will also be open for boaters to enjoy during the event, and the docks boasting 23 slips will be available on a first-come/first-served basis.

As for the literal highlights of the evening, 9:30 p.m. fireworks will be launched from two barges on the Mississippi River, and synched to music heard throughout both the Iowa and Illinois parks. Admission to Red, White, & Boom! in both Iowa and Illinois is free, and more information on the bi-state festivities is available by visiting RedWhiteAndBoomQC.org.