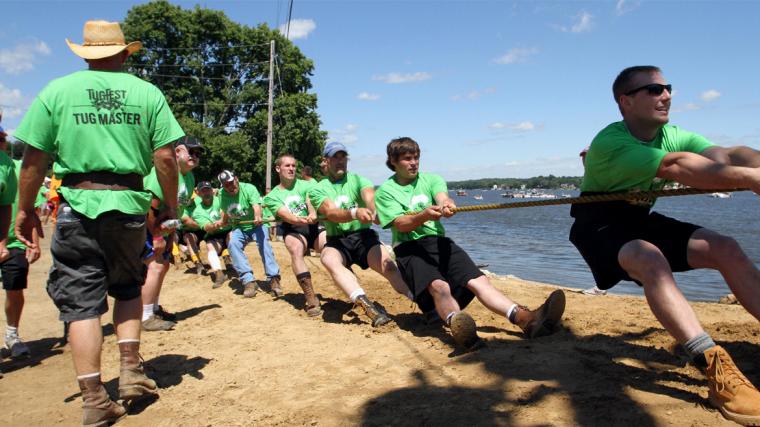 From August 8 through 10, an eagerly awaited summertime tradition will take place both on and in between the LeClaire and Port Byron Levees, as the 33rd Annual Great River Tug Fest delivers outdoor family fun with carnival attractions, live music, arts and crafts vendors, fireworks displays, and the hotly anticipated tug-of-war over the Mississippi River.

The Great River Tug Fest began in 1987, with 10 tug teams of 20 participants each pulling with all of their strength on a 2,700-foot, 680-pound rope that spanned the Mississippi between LeClaire, Iowa, and Port Byron, Illinois. Each year since, teams have competed to see which state will claim the festival's alabaster statue of a bald eagle in flight, and on an annual basis, as many as 35,000 people have come to the levees to view the only tug-of-war held across the longest river in the United States. This local tradition has been featured in numerous travel and vacation magazines, as well as on several television programs, including The Montel Williams Show and the Discovery Channel's Wreakreation Nation.

In addition to the bi-state tug-of-war itself – scheduled for 12:30 p.m. on Saturday, August 10 – the Great River Tug Fest will feature carnivals at both the LeClaire and Port Byron levees complete with rides, games, food and beverage vendors, and children's activities. In LeClaire, the live-music performances include sets with Doug Brundies (7 p.m. Thursday), North of 40 (7:30 p.m. Friday), and The Binjers (8 p.m. Saturday). Port Byron's live music features concerts with Project X (5:30 p.m. Friday), Small Town Titans (8:30 and 10 p.m. Friday), the Sam, Wyatt, & Aleck Acoustic Band (8:30 a.m.), Dirty Water Boys (5:15 p.m. Saturday), and 3 on the Tree (9 p.m. Saturday). Both levees will also boast additional events and attractions, with LeClaire hosting bingo games, bags and arm-wrestling tournaments, and a grand parade, and Port Byron featuring a pancake breakfast, bags and arm-wrestling tournaments, games at the Port Byron library, and the annual Prince & Princess Pageant. Fireworks, meanwhile, will be set off and viewable from both Tug Fest locales at 9:30 p.m. on Friday evening.

For more information Great River Tug Fest events in LeClaire, visit TugFest.com, and for more on the August 8 through 10 happenings in Port Byron, visit TugFest.org.