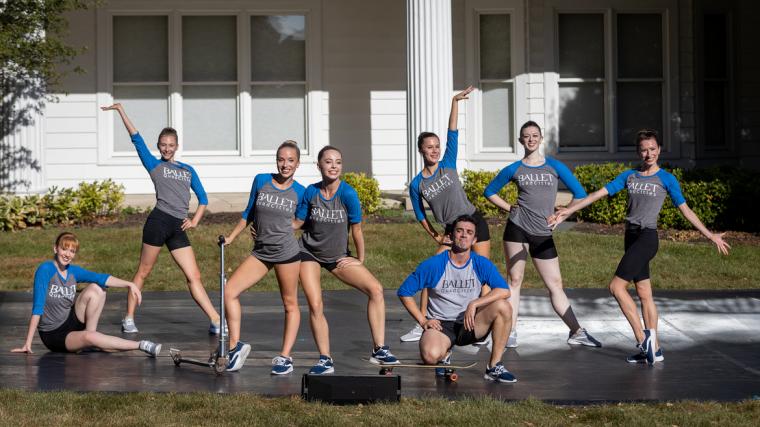 Although the pandemic is currently depriving us of movie sequels, the professional talents of Ballet Quad Cities are at least ensuring that local audiences get a live one with the company's Ballet on the Lawn: Take Two – a September 20 follow-up to the dancers' hugely successful outdoor presentations of Ballet on the Lawn that took place, as this new one will, at Davenport's Outing Club.

“It went so well,” says Ballet Quad Cities' Artistic Director and choreographer Courtney Lyon of the August 30 event. “We ended up having three sold-out performances. We capped them at 100 people per performance, because it was our first time trying it and we wanted to see how it would go, and we also wanted to make sure people were comfortable with the distancing. But we had great sight lines for everyone, great weather – it was just perfect.

“So because the first one went so well," she continues, "we're doing a whole new program for Take Two – except for one piece. After the last performance, we had people vote on what their favorite piece was. They could vote by telling us in person, via e-mail, posting online ... . Some people even wrote us letters, which was kind of fun. And so we have a winner that we're going to repeat: the Clair de Lune. It's that gorgeous [Debussy] piano music, and the dancers wear these long, light, silk, white dresses, and it's just sort mesmerizing. And it just feels so right for the outdoors."

In addition to that audience favorite, says Lyon, "We'll have a piece called Glassworks – a piece that I actually choreographed, I believe, two seasons ago. It was only performed one time in the lobby of the Figge [Art Museum], and it was performed for a sold-out audience of, like, 300 people; the lobby was packed. It was created to kick off the Louis Comfort Tiffany exhibit, with all those beautiful lamps and stained glass, when that came through.

"But we realized, in hindsight, that no other audiences saw it! So we're bringing that one back, so now other audiences have a chance. It's pretty cool, and I'm using [Leonard] Bernstein music to celebrate the Americana of it. Right now, I'm adding some sections of music to it to fill it in some more. Dusting it off, you could say. Dusting off the glass.
"We also have a new piece that Emily Kate Long is choreographing called Slaughter on 10th Avenue. It's an excerpt from the musical On Your Toes – like a show-within-a-show dance scene from this Hollywood musical – and it has gangsters, and policemen come in, and there's a hoofer who shows up ... . It's a really fun story, and we're doing a little twist with it, because we're going to set it in Rock Island with that gangster [John Patrick] Looney. That's another one we're working on right now." 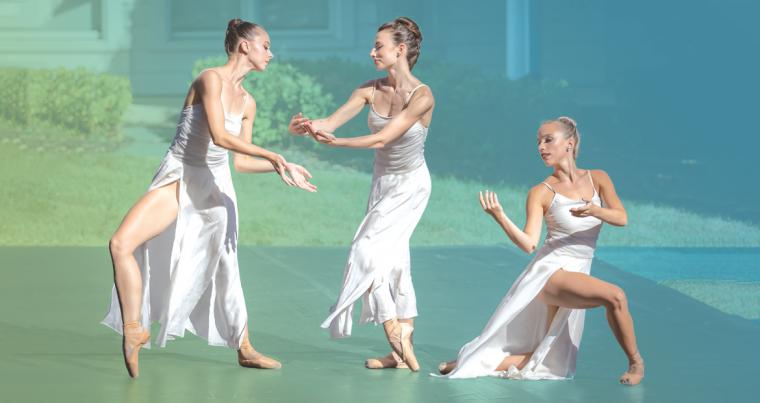 Despite the gangsters, Lyon is quick to add that Ballet on the Lawn: Take Two is “an extremely family-friendly event. Last time, we had all ages in the audience, and it's perfect for a family. You can bring your picnic blankets, you don't have to worry about, you know, 'Do I need an aisle seat in case my children need to stretch their legs?'"

Lyon laughs and says, "We're definitely thinking about that as we're putting this new ballet together – all those awesome kiddos in the audience. We want to make sure they get the chance to see some art in person right now. And we have a little bit of everything on the program. We have modern, with a piece that one of our experienced company members Meghan Phillips is choreographing. We've got a jazz piece, we have a contemporary piece – and so we're going to add a classical piece.

"Back in March when the world shut down, we had to cancel our Sleeping Beauty production that was supposed to be at the Adler [Theatre]. We were already in the process of putting that together, so we had a ballet that was almost ready to go on-stage when we got shut down. So what we're doing now is having our Princess Aurora performing a solo in her tutu and her crown.

“That's going to be really fun,” says Lyon, “because I think classical ballet is so appealing to people. The imagery of the tutu, and the pointe shoes, and then you've got the classic Tchaikovsky music ... . People know it even if they don't realize they know it. And that one is really exciting for us to bring back at all, because we didn't get to do it before.

"We're letting Sleeping Beauty wake up!" Lyon says with a laugh. "She's been asleep since the pandemic hit, so it's time for her to wake up!"

Ballet on the Lawn: Take Two will be presented at Davenport's Outing Club at 1, 3, and 5 p.m. on September 20, and guests are asked to bring blankets and/or chairs for the outdoor performances. Charcuterie picnic boxes are available to order for $20, and there will be a cash bar accepting cash only – no cards. Tickets are $20 through and must be purchased in advance – no tickets will be sold at the door – and more information and reservations are available by visiting BalletQuadCities.com.