Ballet Quad Cities: “For America,” May 6 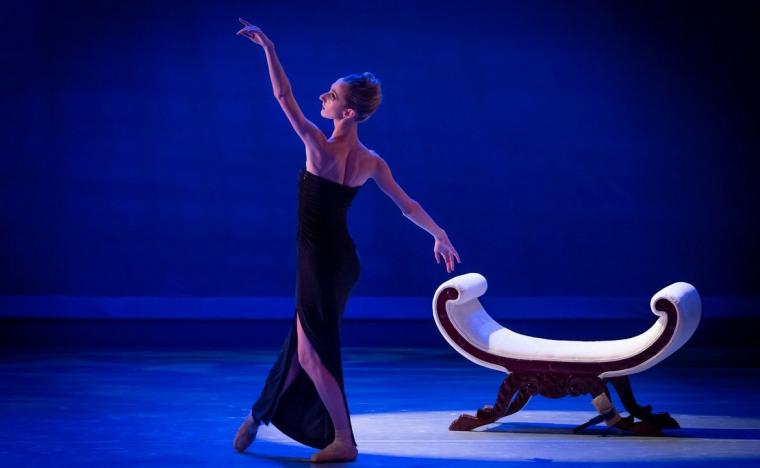 Ballet Quad Cities' “For America" at the Figge Art Museum -- May 6.

Returning to Davenport's Figge Art Museum for a unique live performance held in conjunction with a hugely popular exhibit, the professional talents of Ballet Quad Cities deliver original choreography with wide-ranging themes in For America, a May 6 celebration of dance and art specifically inspired by works in the museum's For America: 200 Years of Painting from the National Academy of Design.

“I love when we do these performances with the Figge,” says Ballet Quad Cities Artistic Director Courtney Lyon. “What some people maybe don't realize is that we get ideas for some of the dance things that we're going to be working on, like, years prior. So a couple years ago, we knew that the Figge was going to be bringing in For America. We'd gotten the catalog, and we looked at the artwork, and we knew it was going to be a really cool exhibit that we could be inspired by.

“The way they've put it up in the Figge is really neat,” she continues. “It's on three different floors. You start at the top and you work your way down, so it's like entering different worlds. I love it.

“So Emily Kate Long and Meghan Phillips and myself had been looking at the catalog, and then we went to the Figge in person once the exhibit came, and we just [figuratively] grabbed pieces of art that were really memorable to us for whatever reason – the backstory, or the painting itself, or the colors, or the people, or whatever. And now, for our performance, we're finding our own music for the pieces of art that we chose.”

Some of the works in the For America exhibit, Lyon says, “reminded us of one of the ballets that we did a few years ago, which was Billy the Kid. That was set to Aaron Copland music, it was set out in the Wild West, and it really gave you the idea of being in wide-open land … . The flavor of that time in history. When I was doing research for Billy the Kid, I was really getting my mind wrapped around these small towns and vast deserts and the lifestyle of the Wild West, and some of those [For America' paintings reminded me of that. So I'm going to do an excerpt from Billy the Kid because I feel like it's so cool to pull together the time period of the painting and the music of Aaron Copland music, who's of course an American composer. Bringing that all together.

“Emily Kate Long chose a painting that's the skyline of Manhattan from far away, and the piece that she's doing is really, really cool because she's using the idea of the history of ballet and how, when it came to America, it really started in New York City. It really started with [George] Balanchine and the New York City Ballet company, and even before he had a company of American dancers, he started a school in New York City – the School of American Ballet.”

Lyon continues, “That's a pretty notable part of dance history for America. And so Emily took this painting from the 1920s or '30s, the same time period that the first American ballet school was started here, and she is using children only in her choreography. She's using some of the students from our Ballet Quad Cities School of Dance – some really talented young students that, to us, represent the future of the art form and the future of dance for the next generation. Tying the past with the future. And she's using the music of George Gershwin – another American composer.”

Regarding Phillips'' contribution, Lyon says, “Meghan is using a painting that has a lot of detail – it's a woman in a garden, and I think there are hollyhock flowers that go all the way up, and it's just beautiful. So hers is more of a dance portrait.

“And then I'm doing a piece called Barrel of Fun. You know that ride at Coney Island? I don't know if it's even still there, but a lot of people get in this big tube and it moves slowly and people, like, tumble around each other. The Barrel of Fun. So there's this painting where all the people in it are dressed very nicely, because back in the day, when you'd go to do those things, people would dress in their finery. At amusement parks.”

Laughing, Lyon says, “So my piece is based on these people dressed very nicely all tumbling on each other in this big ol' barrel. In choosing my music, I've been listening to a little Frank Zappa – a little improv and wild music. I just want to find something a little different, you know? Because that painting is so different.”

Ballet Quad Cities' For America performance will take place in the Figge's Quad City Bank & Trust Grand Lobby at 6:30 p.m. on May 6, and although the presentation is free, registration is required and the event is limited to 40 guests. For more information on the evening, call (563)326-7804 or visit FiggeArtMuseum.org.