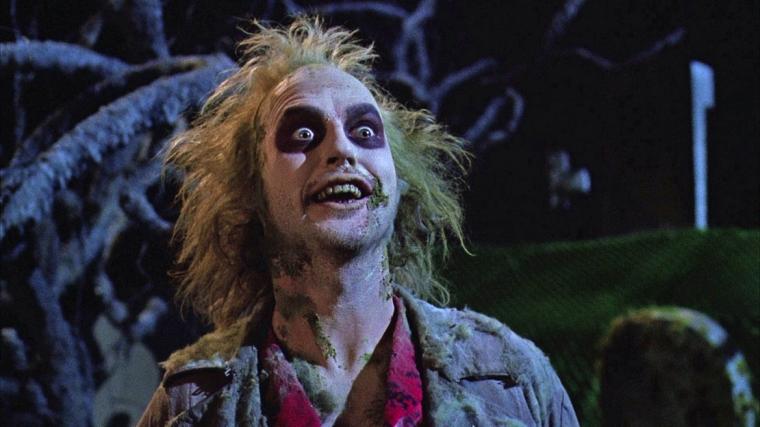 Described by the Washington Post as “the perfect balance of bizarreness, comedy, and horror,” director Tim Burton's Oscar-winning supernatural slapstick Beetlejuice is the focus of the latest trivia might at Bettendorf venue The Tangled Wood, the interactive October 26 event inviting attendees to share their knowledge of this unforgettable movie entertainment that went on to spawn video games, an animated TV series, and even a Tony-nominated Broadway musical.

Released in early 1988 as only the second feature-length film (following 1985's Pee Wee's Big Adventure) directed by Burton, Beetlejuice centers around a recently deceased couple (Alec Baldwin and Geena Davis) who become ghosts haunting their former small-town home now owned by a trio of big-city eccentrics (Catherine O'Hara, Jeffrey Jones, and Winona Ryder). Hoping to scare away the new family for good, the undead marrieds enlist the aid of an obnoxious, devious poltergeist named Betelgeuse (pronounced and occasionally spelled "Beetlejuice," and portrayed by Michael Keaton), a creature from the netherworld who has his own nefarious reasons for wanting to help the guileless couple. Add a pair of beloved Harry Belafonte hits, a civil servant whose cigarette smoke leaks from her neck, a few unsuccessful attempts at exorcism, and Dick Cavett, and you have Beetlejuice, a nutty riot that even the famously prickly New Yorker critic Pauline Kael immediately deemed "a comedy classic."

Burton's film opened theatrically in the United States on March 30, 1988, and eventually grossed $73,707,461 in North America on a $15 million budget, leading to Beetlejuice's placement as the 10th-highest grossing film of 1988. With the New York Times' Vincent Canby calling it “a farce for our time,” the film was initially met with mostly positive reviews, and its reception has only increased over the years. Based on 59 reviews collected by the online aggregate Rotten Tomatoes, Beetlejuice holds an 85-percent overall approval rating, and the Web site's critical consensus reads, "Brilliantly bizarre and overflowing with ideas, Beetlejuice offers some of Michael Keaton's most deliciously manic work – and creepy, funny fun for the whole family." Burton's achievement went on to win the Academy Award for Best Makeup and three Saturn Awards, for Best Horror Film, Best Makeup, and Best Supporting Actress Sylvia Sidney as the aforementioned, deceased chain-smoker. Keaton also won the Best Actor prize from the National Society of Film Critics (also awarded for Keaton's turn in the recovering-addict drama Clean & Sober), while the 2018 stage version of Beetlejuice earned eight Tony nominations and is set to re-open at Broadway's Marquis Theatre on April 8, 2022.

Beetlejuice Trivia Night begins at 7 p.m. on October 26, participation is free for the all-ages event, and cash prizes will be awarded. For more information on the evening, call (563)949-1000 and visit TheTangledWood.com.