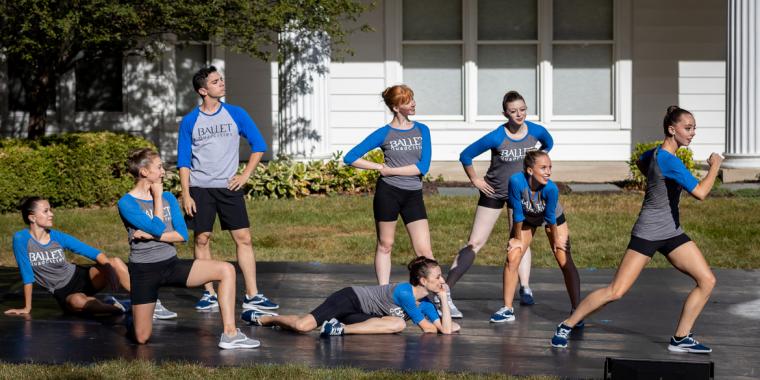 The professional talents of Ballet Quad Cities are off to see the Wizard – the wonderful Wizard of Oz – in the company's latest presentations at Davenport's Outing Club: Ballet on the Lawn Take Two: Dorothy Goes to Oz!, a pair of September 12 performances boasting an completely new take on beloved characters made unforgettable through L. Frank Baum's children's-book series and the 1939 film classic starring Judy Garland.

Emily Kate Long, Ballet Quad Cities' artistic associate and associate outreach director, serves as the debuting piece's choreographer, and says the idea for the project “actually started last spring, when we thought doing a sort of mashup in telling the stories of Alice in Wonderland and Dorothy.

“It was this kind of nebulous idea,” Long says with a laugh. “We thought maybe it would be one act for each each, or that there would be some way to combine the stories. But it just didn't end up panning out, so we decided to make it all about Oz, and with all-original, brand-new choreography.

“I've been using both the original storybook and the iconic 1939 film for inspiration,” she continues, “because I know that most people are probably more familiar with the film than they are with the book. It is a 30-minute version, so the story has been fairly condensed. But we still get Dorothy, we still get the tornado, we get Glinda, we get all of the Scarecrow/Tin Man/Lion friends, we get the Wicked Witch and her scary creatures … . It's like Wizard of Oz: Greatest Hits!”

The music that Long is employing for the Dorothy Goes to Oz!, says its choreographer, “is a little bit of a collage. I selected a lot of music with sort of a mid-century sound. Some of it features works by mid-century composers, and some of it is a little more jazzy. Like the scene with the tornado, for example, has a really '60s-surf-rock feel. When we're performing outdoors, we obviously don't have sets or lighting or a backdrop of any kind. So we really have to be conscious of how the music will set the atmosphere, and the mood for each scene, in addition to the dancing and the costumes.”

Among the ballet's featured performers are Ballet Quad Cities' company members Claire Cordano (Dorothy), Madeleine Rhode (the Scarecrow), Christian Knopp (the Tin Man), Mahalia Zellmer (the Lion), Elizabeth Brooks (Glinda the Good Witch), and Jillian Van Cura (the Wicked Witch of the West). Describing the art of putting the work together, Long says, “It's kind of been a process of making a little bit of, and then going back to the beginning, and then looking at everything that happened to make sure the story still makes sense. And remembering to watch it as an audience member would watch it – without the back knowledge of what I'm trying to say for what parts of the story I'm using – and seeing if it actually reads as a visual presentation.”

Happily, Long adds, audiences' familiarity with the characters, and the movie version's iconic interpretations of those characters, has aided the ballet's creation.

“The thing that has been most important for me with the characters is making the contrasts really obvious. So the Scarecrow is very, very floppy and doesn't have any bones because he's made of straw. And the Tin Man is very stiff because he's rusty. And the Lion is … sort of a big baby.”

Laughing, Long continues, “And then Dorothy is very sweet and happy and carefree, but also very savvy. That's something I love so much about the film. That, costumes or not, you know who's who, for sure. Although the dancers will definitely look like their characters.”

In addition to the half-hour Wizard of Oz segment that constitutes the program's second act, the first act for the latest Ballet on the Lawn will be composed of two debuting pieces choreographed by Ballet Quad Cities' artistic director Courtney Lyon.

“When he created it,” Lyon continues, “it was intended to be for a narrator, seven musicians, and to be danced. He had this concept of this hour-long performance that put these three art forms together. So this work is more known in the music field; I'm sure that musicians play it a lot more often than it's actually danced.

“But it's pretty cool getting to work on a piece of Stravinski music I've never worked before. And we'll be dancing a longer version of the same piece (on October 9) at the Galvin Fine Arts Center with the Quad City Symphony Orchestra. So,” says Lyon with a laugh, “this is kind of me getting a running head-start on it.”

“It's just so fun to create,” says Long of the works that will compose Ballet Quad Cities' latest presentation. “I hope it's fun for everyone to watch.” And, for those wondering: Will Toto make an appearance in Long's Wizard of Oz segment?

She laughs. “He will not be a living, breathing Toto, but yes, there will be a Toto.”

Ballet on the Lawn Take Two: Dorothy Goes to Oz! will be presented at Davenport's Outing Club at 3 and 5 p.m. on September 12, and guests are asked to bring blankets and/or chairs for the outdoor performances. Charcuterie picnic boxes are available to order for $20, and there will be a cash bar accepting cash only – no cards. A special Afterglow party on the lawn will be held following the 5 p.m. performance, in which audience members are invited to meet the dancers and choreographers.

Tickets are $15-25 and must be purchased in advance – no tickets will be sold at the door – and more information and reservations are available by calling (309)786-3779 and visiting BalletQuadCities.com.