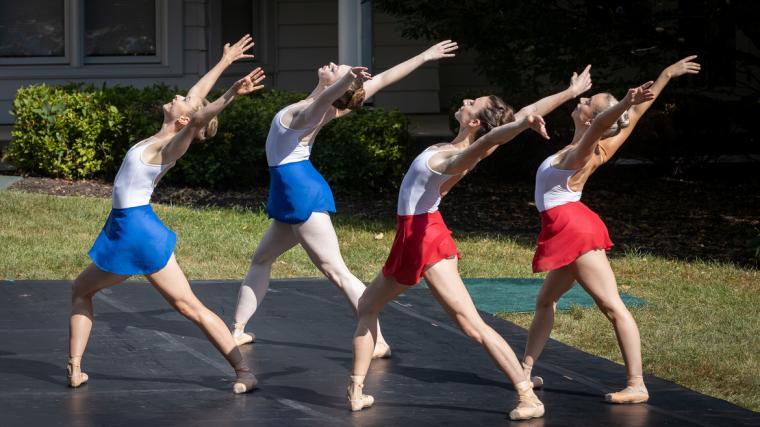 Ballet Quad Cities' "Ballet on the Lawn" at the Davenport Outing Club -- August 22.

On August 22, the professional talents of Ballet Quad Cities officially begin their 2021-22 season – an intensely busy one in which the schedule includes a collaboration with the Quad City Symphony Orchestra, a disco party, a Lewis Carroll adaptation, and Nutcracker performances in both Davenport and Des Moines. But while no one wants a repeat of 2020, the year actually did yield some good things – such as Ballet Quad Cities' partnership with Davenport's Outing Club, which will again host outdoor performances of the dance company's Ballet on the Lawn.

“It worked so well last year,” says Ballet Quad Cities' Artistic Director Courtney Lyon, “so for this Ballet on the Lawn, we're keeping our format that really worked – which is a little bit of everything. So we'll have some classical ballet, some contemporary ballet, some jazzy stuff, modern dance, and tap. We've got the full gamut – everything's going to be really upbeat, really happy, and we're going to keep everyone's spirits high.”

The series of choreographed vignettes on the August 22 program includes a few memorable Ballet Quad Cities creations from recent years. “We have a tap piece that we did last year that people loved, so we're going to do it again because people kept asking for it again,” says Lyon with a laugh. “It's called Smooth Sailing, and that will be with Caroline Cady – who a lot of people know because she grew up here and has danced a lot and people connect with her – and Nicholas Bartolotti, who's a fan favorite and one of our favorite dancers.

“And there's also a piece I originally did for the Figge [Art Museum] that was inspired by the Louis Comfort Tiffany exhibit that came through. I created a ballet to be done in the lobby of the Figge back then, and that one's really really cool.”

As usual, though, the August 22 Ballet on the Lawn will also boast a number of debuting pieces, including, as Lyon says, “ a really, really fun piece that was choreographed by our guest choreographer Lynn Bowman. Lynn grew up here in the Quad Cities. She actually trained at the school here, and then went off and had her professional career and is now in academia, and we asked her to come back in town and set a piece on our dancers. It's on the full company and it's called Rye Whiskey, and it's a really upbeat piece set to bluegrass music. That's a fabulous new addition.

“We have one called The Lovers' Waltz, which is the title of the piece of music, and that's being played live by violinists Amy Klutho and Victoria Rice. Emily Kate Long is choreographing that one, and it's a beautiful pas de deux for two of our new dancers: Elizabeth Brooks and Christian Knopp. I'm doing a new piece to some Scott Joplin music – Stoptime Rag, which is one of his really popular ones. It's very energetic and a little theatrical, and for that, I have a couple of guys, Nicholas and Christian, and then Mahalia Zellmer is the female, and they're all fabulous." 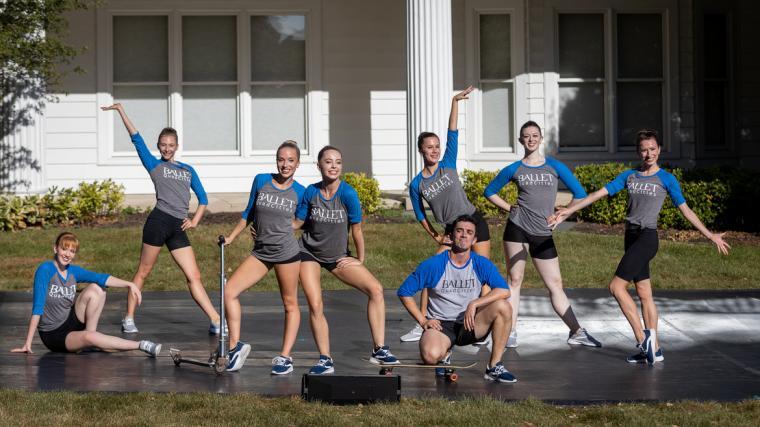 “And then I'm doing another new piece of choreography,” Lyon continues, “but it doesn't have a title yet. It uses the full company and it's going to be opening the show, and in my mind, it's like I'm presenting the company to the audience for the first time as a season kickoff. Madeleine Rhode starts it off with a really nice solo, and then the whole company storms onto the stage and joins her, so she's kind of bringing the new dancers to the audience.

“But like I said, I don't have a title yet, because I'm working fast.” She laughs and says, “Lynn was here last week working on her piece, and I'm getting in there now to get my pieces going. That's why I sometimes don't have specifics when we talk, because I'm just flying by the seat of my pants!

“But that's what I love about it. Like, five minutes from now, I'll be working as fast as I can to make a piece of choreography for the dancers to perform for an audience in 10 days. Obviously, dance is a lot different from, like, an orchestra, where everyone has their score and they know what parts they'll be playing and they practice in their house and everything. We're different because we start from nothing. We start from scratch every single time. There's no script.

“And it's going to be different every time,” Lyon adds. “I mean, sometimes we'll repeat something, but it still came from nowhere. Like with The Nutcracker. Sure, you can read the book, but there's no 'dance script' for it. It's new every time you do it. And our dancers are so talented, and there's such variety in them – some are really funny, some are really dramatic – so when I have a dancer in front of me, it becomes about, 'What's the best way to entertain an audience with this particular dancer?' It's the best part of my job. It's so fun.”

Ballet on the Lawn will be presented at Davenport's Outing Club at 1, 3, and 6 p.m. on August 22, and guests are asked to bring blankets and/or chairs for the outdoor performances. Charcuterie picnic boxes are available to order for $20 (orders required by August 17), and there will be a cash bar accepting cash only – no cards. Tickets are $15-25 and must be purchased in advance – no tickets will be sold at the door – and more information and reservations are available by calling (309)786-3779 and visiting BalletQuadCities.com.