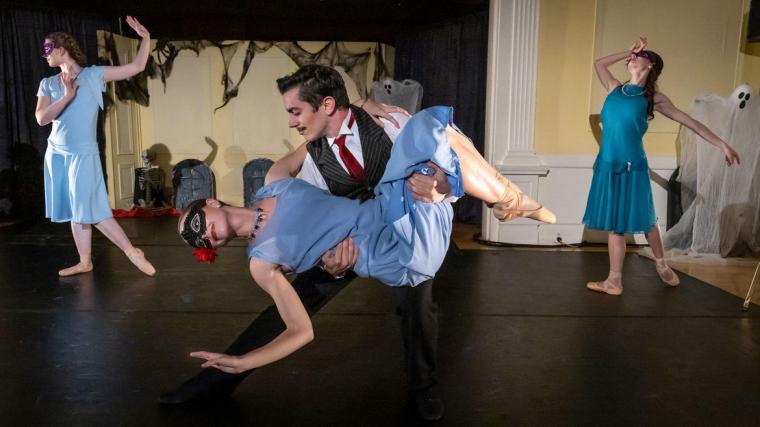 On February 12 and 13, love will be in the air at Davenport's Outing Club when the professional dancers of Ballet Quad Cities present their Valentine's Day Weekend celebration Love Stories – the company's ever-popular series of choreographed vignettes that returns for three performances for the first time since 2019.

“We've done Love Stories in the past for many, many years,” says Ballet Quad Cities' Artistic Director Courtney Lyon, “and audiences always love it, and it always works best in more intimate venues with smaller audiences. Last year, we didn't wind up doing it because we had a plan to do a big Sleeping Beauty at the Adler [Theatre], so that's where our focus was last winter and spring.

“But it's perfect for the Outing Club,” she continues. “It is a great setting. It's like dinner theatre, but for dance. Delicious meals and great dancing.”

This year's program, choreographed by Lyon and Artistic Associate Emily Kate Long, is, as its title would suggest, “all about love.” But as Lyon adds, “That doesn't always mean romantic love,” even though the program's two anchor pieces most definitely are.

One of them, says Lyon, is “the Carmen pas de deux. It's about a 10-minute segment from Carmen, and most people are familiar with at least some part of the music or the story. It's originally a four-act, many-hours-long opera, and it was condensed down into a shortened version of a ballet in the 20th century, and we're using some of the music and one of the more iconic scenes of Carmen dancing her habanera. And seducing her man,” she says with a laugh. 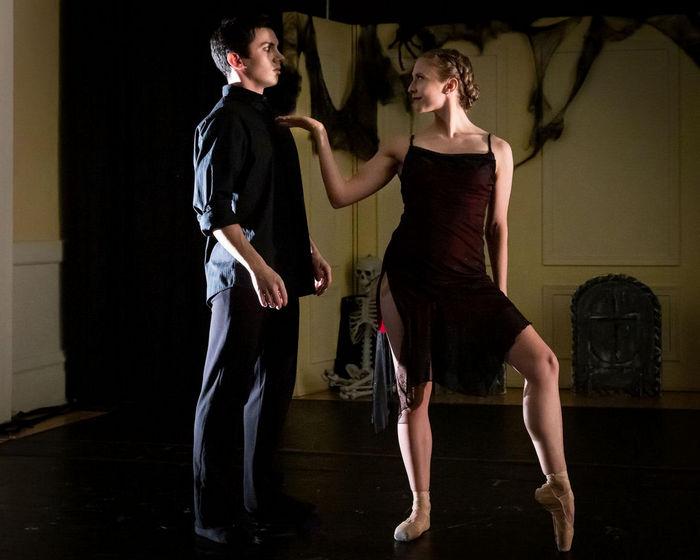 “Actually,” says Lyon, “I did this one two years ago when we presented Music Moves at Augustana College's theatre. That was our first time there, and that theatre has a really interesting setup where the audience is on three sides and there's a kind of black-box feel. The pas de deux worked really well there, and so I thought, 'Oh, this is going to be perfect for the Outing Club.'

“Our other anchor piece is something that hasn't been on-stage for several years, but it's something that we get requested to do very often, and that is Bolero,” the iconic Maurice Ravel piece (made legendary in the film comedy “10”) that also boasts Lyon as choreographer. “It was originally choreographed in 2015, and the cool thing about that piece is that it is set on five dancers on four chairs, and those chairs are kind of clustered together – and the dancers never leave the chairs. So it's kind of a really interesting evolution.

“It ended up being a very well-received piece. We were able to present it at a lot of places – at the Figge, all kinds of theatre spaces, all kinds of informal dance spaces. And people seemed to get mesmerized and captivated by it, and by the end, they were like, 'Oh gosh, I need to see that again.' So we thought, 'This one hasn't been on stage for a number of years – let's bring it back!”

With Love Stories boasting the return of longtime Ballet Quad Cities guest artist Malachi Squires (says Lyon, “He's based in Chicago, and he's a great asset to our company, and we always enjoy working with him very much”), the rest of its program is filled with what Lyon calls “really fun and light pieces. One is called Special Delivery – it's the dancers getting ready to deliver a valentine to an audience member. But we also have disco styles, plus a little bit of … . I know know if its '80s dancing, really, but like a little bit of country line dancing to a version of the song 'Something Stupid.' It's been covered by a lot of different people, and I found a really quirky version of it.

“What's cool about these performances at the Outing Club,” she continues, “is that we're able to put what people expect of ballet – a little bit of tutus and pointe shoes – and mix it in with all kinds of everything. So in one hour, people will see a huge range of styles. Some of it will be pointe work, some of it will be more jazz, more modern, some of it is just more theatrical where people will be laughing … . A nice range.” 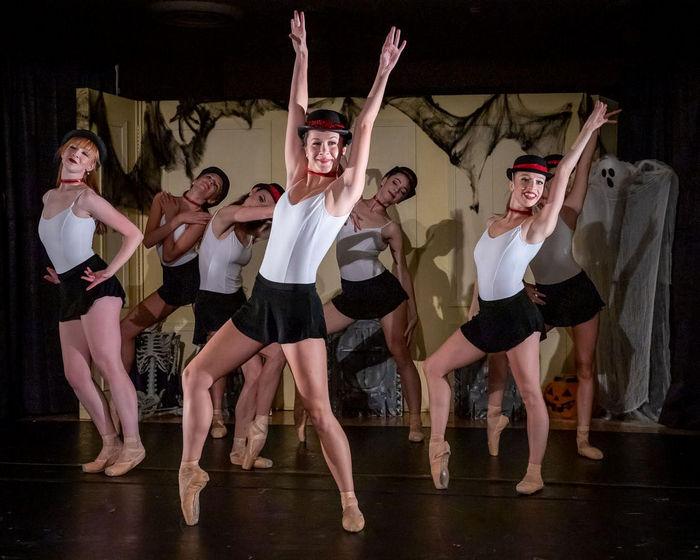 Each of the three Love Stories performances will also boast distinct dining options. On Saturday, February 13, the 2 p.m. program (doors open at 1 p.m.) will have beverages and assorted desserts available a la carte, while at the 6:30 p.m. ballet (5:30 p.m. doors), guests will be served a three-course meal. The 6:30 p.m. show (5:30 p.m. doors) on Friday, February 12, meanwhile, is Ballet Quad Cities' “Burgers & Ballet” performance, with the dance vignettes preceded by hamburgers and fries.

“Isn't that great?” exclaims Lyon, saying of the company's founder and CEO, “That was all Joedy Cook's brainchild.” Burgers & Ballet also seems an ideal performance choice for patrons attending with children, which Lyon says happens with inspiring regularity.

“We have kids of all ages at our performances. And with the shows at the Outing Club, they really like it because they're fairly close to the stage – they're not separated, like you are if you go to the Adler or some other large theatre. You're maybe 10 or 20 feet away from the dancers, and on the same level – the dancers aren't elevated on a stage. So the families get to really connect with the dancers and really enjoy it.”

Lyon adds, “And people are really enjoying their time with their families, or their dates, or whoever they end up going with. It's a great chance to get out, a great dinner … . It's just great for everyone.”

Dinner reservations for Love Stories must be made by 11 a.m. on Wednesday, February 10, and tickets for tables of two, four, six, or eight guests will be available, with all seating and tables spaced generously apart with extra safety measures in place. For more information and tickets, call (309)786-3779 or visit BalletQuadCities.com.