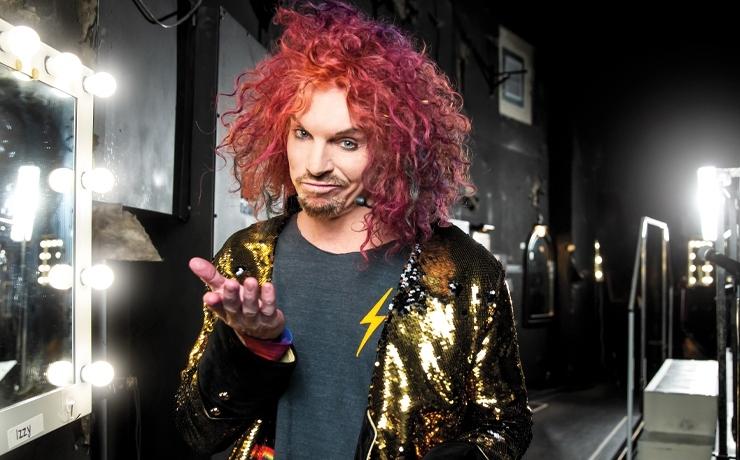 An instantly recognizable stage presence who has served as a Las Vegas headliner for close to 20 years, the madcap comedian Carrot Top brings his prop comedy and observational humor to Davenport's Adler Theatre on May 19, his career of more than a quarter-century boasting everything from voice-over duties for the Cartoon Network to appearances on such Emmy-winning television series The Larry Sanders Show and Scrubs.

Scott “Carrot Top” Thompson made his professional comedy debut on Star Search, and from 1995 to 1999, was the continuity announcer for Cartoon Network, for which he also produced and starred in the early-morning show Carrot Top's AM Mayhem from 1994 to 1996. Since then, he has appeared on television in CSI: Crime Scene Investigation, Larry the Cable Guy's Christmas Spectacular, Gene Simmons' Family Jewels, Space Ghost Coast to Coast, Criss Angel: Mindfreak, George Lopez, and Tugger: The Jeep 4x4 Who Wanted to Fly, and in 2006, the comedian appeared in the Reno 911! episode "Weigel's Pregnant" as an enraged version of himself who trashes his hotel room and steals a police car. Beyond serving as a guest judge for Last Comic Standing in 2008, Carot Top also appeared as himself on the Bradley Cooper episode of Between Two Ferns with Zach Galifianakis, as well as in the 2009 Bradley Cooper film-comedy smash The Hangover.

Fans have flocked to Carrot Top's Las Vegas headlining residency at the Luxor Hotel and Casino for over 15 years to catch comedy’s King of Props current take on pop culture, music, and headlines of the day, and boasting a dozen trunks filled with approximately 200 props on stage each night, audience members can count on not seeing the same show twice. As the comedian has stated, “I love creating props that are relevant to whatever’s current – from a news headline to a song I heard on the radio.” Carrot Top’s live stage shows are famed as spectacles worthy of most arena rock bands, featuring rock-star-appropriate lighting and music effects, fog machines, and streamer cannons – all in addition to his prop-filled trunks. “When I started touring at the beginning of my career, I had two trunks and a strobe light,” said Carrot Top. “Things got pretty crazy pretty fast, and before I knew it, I had a team touring the country in an 18-wheeler with 35 trunks full of props.”