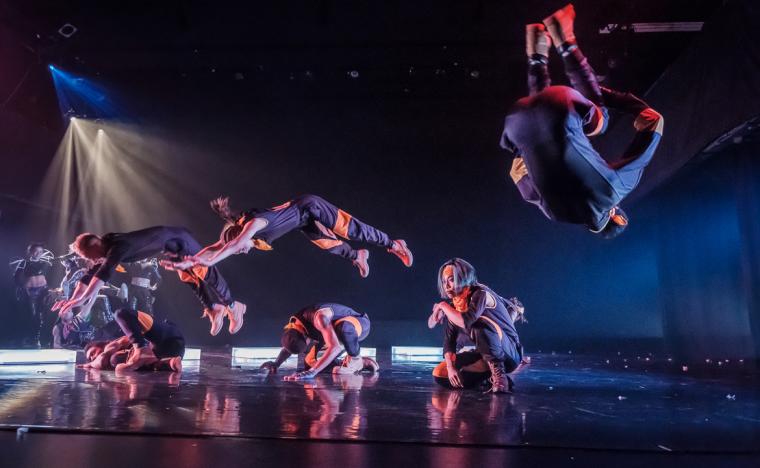 With their works deemed “so imaginative, so playfully revisionist, so superbly realized” by the Chicago Sun-Times and “fresh and innovative” by the Chicago Tribune, the Windy City hoofers of Chicago Dance Crash serve as the latest guests in the Quad City Arts Visiting Artists Series, their local January 23 and 25 engagements sure to deliver, according to the Tribune, “a show that so floods the stage with energetic talent.”

Led by artistic director Jessica Deahr, Chicago Dance Crash has emerged as the premier fusion-style contemporary dance company in the Midwest. Emphasizing a unique mission of both athleticism and accessibility, the Crash aesthetic is most notably recognized by its combination of concert and hip-hop techniques in works ranging from full-length productions to repertory pieces and freestyles.

Chicago Dance Crash was founded by Illinois State University graduates Marissa Moritz, Charlie Cutler, and Mark Hackman as a professional outlet for works the trio had created as students. Initially designed to showcase the individual talents of the three (Cutler an actor, Hackman a martial artist, and Moritz a modern dancer), early productions utilized dance and acrobatics while forwarding a linear, conflict-driven story. The company's first performances took place at the 60-seat, historical Mary-Arrchie Theatre in Chicago's Northeast neighborhood of Buena Park, and its first production, The Mercutio Story, played numerous performances across the city before ultimately performing at New York City's storefront theater The Space. Crash incorporated on December 23, 2003, employed its first artistic director in 2003, and established its current local season structure in 2005. Adopting a company dancer formation in 2007, the organization began touring nationally and internationally in 2012.

Artistic director Deahr first worked with Chicago Dance Crash when she took on a supporting role in the 2007 production of Tiger Prawn: The Mountain Mover. She continued guest work with the organization until being promoted to a company position by artistic director Kyle Vincent Terry in 2009, and upon Terry’s retirement, Deahr was named the company’s resident choreographer at the end of 2011. As the organization operated without a formal artistic director for its 2012 season, Deahr directed and choreographed the season’s signature production Gotham City, later cited by the Chicago Tribune as one of the city's 10 best performances of the year. She was internally acknowledged as the company’s artistic director throughout the 2012 season, with her promotion publicly announced to the audience at the company’s final performance of the year on November 17.