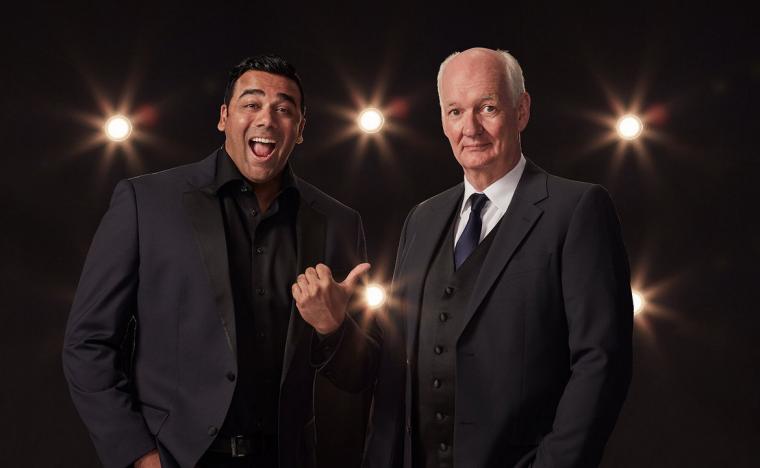 Described by The Times of London as “very funny” and “a celebration of the human imagination,” the acclaimed touring presentation Colin Mochrie's Hyprov with Master Hypnotist Asad Mecci lands at the University of Dubuque's Heritage Center on October 15, ensuring a night of extraordinary mental prowess and unbridled comedy with the touring hypnotist and the beloved co-star of TV's Whose Line Is It Anyway?

Hypnosis and Improv — two art forms that have mystified and entertained fans, skeptics and everyone in between for decades worldwide – come together as two masters of their crafts unite for a totally unique comedy experience. In Hyprov, 20 random volunteers from the audience will be put under hypnosis by Mecci, the process of which is a show in its own right. Their inhibitions evaporated and their minds no longer their own. the contestants are methodically, hysterically whittled down until the five best are left on stage. At that point, show co-creator and world-class improv artist Mochrie takes the stage to improvise with the quintet while they are still under hypnosis, turning the show into a comedy extravaganza. In the hands of its two masters, and solely crafted from the audience’s uninhibited subconscious, Hyprov will be an entirely original and completely unforgettable theatrical experience, given that no one can ever know where the unconscious mind will go.

One of the most prolific improvisers on both sides of the pond today, native Scotsman Mochie found his first line of work as a member of the Vancouver TheatreSports League, where he met fellow improviser Ryan Stiles. He toured with the Second City comedy troupe until Stiles recommended he audition for a new British TV show titled Whose Line Is It Anyway? Mochrie spent eight years as a series regular until the program ended in 1998, and then joined the U.S. version on ABC, appearing in every episode, and continuing with the current revival on the CW Network, which is now in its fourth season. Among recent accomplishments, Mochrie has toured the world with fellow Who-ser Brad Sherwood for the past 12 years (most recently to India), appears in the Second City Guide to Symphonies in front of orchestras all over North America, and wrote his first collection of short stories titled Not Quite the Classics. In 2014, Mochrie was also named Canada's Comedy Person of the Year.

Having performed in front of more than 1.5 million people live and millions more through mass media, Asad Mecci's jaw-dropping performances have captivated audiences worldwide. Over the course of his career, he has appeared on Entertainment Tonight, MTV, Maxim Online, and HGTV, and his skills have been noted in publications including the New York Times, the Huffington Post, and Maxim. When away from television cameras and radio waves, Mecci has amazed crowds at Canada's Wonderland, Skydome, the GE Theater, and the Just for Laughs comedy festival. Even within the confines of such major companies as Remax, IBM, and Rogers, Mecci has been invited to entertain and motivate employees and management, and when he is not performing on stage, the frequent touring presence uses hypnosis to help people lose weight, reduce stress, and achieve peak performance.

Colin Mochrie's Hyprov with Master Hypnotist Asad Mecci will be presented in the University of Dubuque's Heritage Center on October 15 at 8 p.m., admission is $27-32, and more information and tickets are available by calling (563)525-7469 and visiting Dbq.edu/heritagecenter.