“All You Care to Eat: A Comedy Thingy Podcast,” March 9 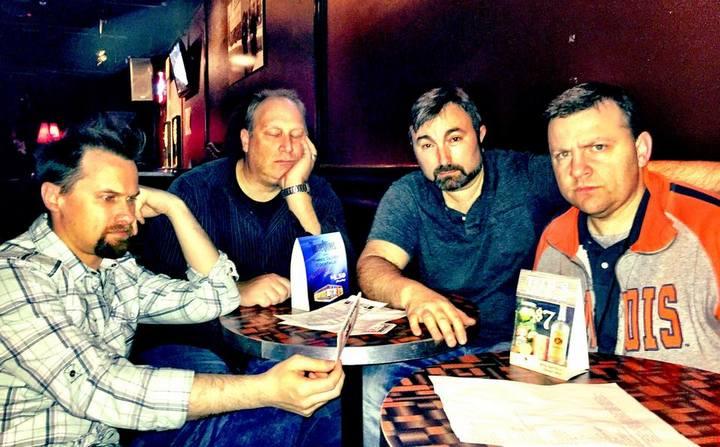 “All You Care to Eat: A Comedy Thingy Podcast" at the Black Box Theatre -- March 9.

Presented at Moline's Black Box Theatre in the style of a radio play complete with live music, sound effects, and actors with scripts in hand, three new episodes of the locally produced podcast All You Care to Eat will be performed by the area troupe Comedy Thingy on March 11 and taped in front of a live “studio” audience.

Formed in 2013, the four-man troupe Comedy Thingy delivers the original comedy stylings of Dave Bonde, Rick Davis, Jeff De Leon, and Clay Sander, all of whom hail from the Quad Cities area and can claim thousands of hours of making crowds laugh with organizations including ComedySportz, The Second City, and Chicago's iO (ImprovOlympic) theatre. Their acclaimed show Leopold! has been featured numerous times at the Chicago Sketch Comedy Festival, and their Web-short series Coach Cliché was an official selection at the All Sports Los Angeles Film Festival.

Among their individual credits, Bonde directed A Doll's House, Part 2 for the QC Theatre Workshop and You Can't Take It with You for St. Ambrose University; Davis appeared in New Ground Theatre's Lobby Hero and wrote and performed the one-man show caRICKatures for ComedySportz; De Leon co-starred in such Prenzie Players productions as King Henry the Fifth and Twelfth Night; and Sander co-authored the stage plays Losers Bracket and the comedy pilot Happy Bobby Gulliver. Together, the artists' talents have been showcased in 12 half-hour All You Care to Eat podcasts to date, with the Black Box Theatre hosting the recording of episodes 13, 14, and 15 in this series that debuted in 2017. Joining the Comedy Thingy talents at Moline's Black Box Theatre will be Chicago comedian, actor, and podcast host Patrick Brennan, guest announcer Mark Allen of WHO Radio 1040, Chicago musician Kathryn Sander, and keyboardist Mike Rose, with the live recording audio-engineered by Gunnar Malstrom.

Comedy Thingy's uncensored comic gifts make All You Care to Eat recommended for ages 18 and over, and tickets are $7 each for the night's three-show taping. For more information and tickets, call (563)284-2350 or visit TheBlackBoxTheatre.com, and for more on the troupe itself – and to hear past episodes of All You Care to Eat – visit ComedyThingy.com.