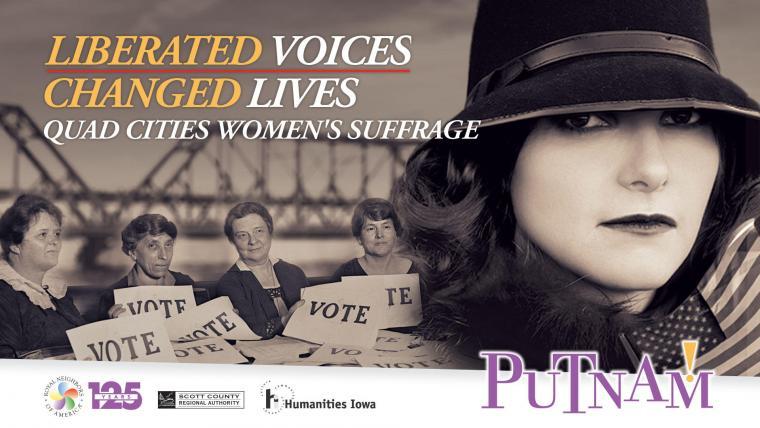 Occurring in conjunction with the 100th anniversary of women's right to vote, a virtual presentation on the Putnam Museum & Science Center exhibit Liberated Voices/Changed Lives will take place on September 17 – a timely and fascinating program hosted by the Bettendorf Public Library as part of its popular Community Connections series.

In the presentation, viewers will discover the unique suffrage story of the Quad Cities 100 years after the passing of the 19th Amendment. Christina Kastell, the Putnam's curator of history and anthropology, will describe how Quad Cities women made the case for and against women's right to vote in the United States, and also investigate the local roots of the women's suffrage movement from the perspective of local women and men from 1900 to 1920. Created specifically for the Putnam, Liberated Voices/Changed Lives features displays, educational videos, historical artifacts, clothing from the suffrage era, and more, and among the Quad Citians celebrated are Davenport's African-American women's-rights leader Francis Baker, Moline-based factory owner and inventor Eldorado Jones, and Mabel Palmer, the Quad Cities' “First Lady of Chiropractic.” (For more information on the exhibition, visit Putnam.org.)

“We had people from the community that we worked with,” says Kastell about the exhibition, “including a professor from Augustana, librarians from three of the local libraries, and a variety of people from other interested groups. So we all threw in ideas of individuals who we thought were good possibilities to focus on, and then we whittled it down from there.

“The Quad Cities is a little bit different than other areas in terms of suffrage,” she adds, “because there were the German immigrants here, the brewers, who wanted to continue brewing beer – and tied in with suffrage was the idea of prohibition. So there were issues, locally, about suffrage, because so much of the population did not want prohibition, and because of that, so many women did not identify themselves as being suffragettes. I think I'd like visitors to take away [from the exhibit] an appreciation for the bold women who stepped out of their comfort zones, in some cases, to get suffrage for all of us.”

Community Connections' Liberated Voices/Changed Lives will be presented online at 1:30 p.m. on September 17, and registrants will receive an invitation and password to join the event via video conference. For information and to register, visit BettendorfLibrary.com.