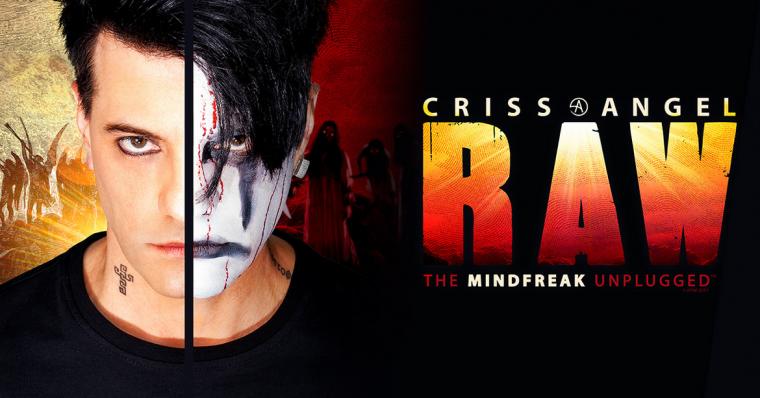 One of the most popular and lauded illusionists in modern history, master prestidigitator Criss Angel brings his new touring sensation RAW: The Mindfreak Unplugged to Davenport's Adler Theatre on September 10, treating patrons to Angel’s famous sleight-of-hand street magic, astounding feats of mentalism, and some of his most iconic illusions.

Born Christopher Nicholas Sarantakos in 1967, Angel began his career in New York City before moving his base of operations to the Las Vegas Valley. He is known for starring in the television and stage show Criss Angel Mindfreak and his previous live-illusion production Criss Angel Believe in collaboration with Cirque du Soleil at the Luxor casino in Las Vegas, a show that generated $150 million in tourist revenue in 2010 and has since been replaced by Mindfreak LIVE. Angel also starred in the SpikeTV television series Criss Angel BeLIEve, NBC's reality-competition show Phenomenon, and the 2014 stage show Criss Angel Magicjam, and between his TV series and various specials on cable and network television, he has been on prime-time for more hours than any other magician in history. He was also named Magician of the Decade in 2009 and Magician of the Century in 2010 by the International Magicians Society, and in addition to his career as an illusionist, Angel was the lead singer for his industrial band Angeldust, which released five albums between 1998 and 2003.

Angel is the holder of several world records, including the longest time submerged under water, the fastest time to escape from a straitjacket (two minutes and 30 thirty seconds), the longest body suspension (five hours and 42 minutes), and the fastest time to perform the famed “Metamorphosis” illusion (less than one second). He is also the holder of the Guinness world record for “The most people to disappear in an illusion,” having made 100 people vanish on May 26, 2010 during a Luxor performance of Believe. On July 20 of 2017, Angel received a star on the Hollywood Walk of Fame, and in addition to these accolades and citations, Angel is the youngest magician to ever be inducted into the International Magician Society's Magic Hall of Fame and the only man to have twice won the Merlin Magician of the Year award, which he did in 2001 and 2004.

Criss Angel brings his RAW: The Mindfreak Unplugged production to Davenport on September 10, admission to the 7:30 p.m. show is $52-92, and tickets are available by calling (800)745-3000 or visiting AdlerTheatre.com.