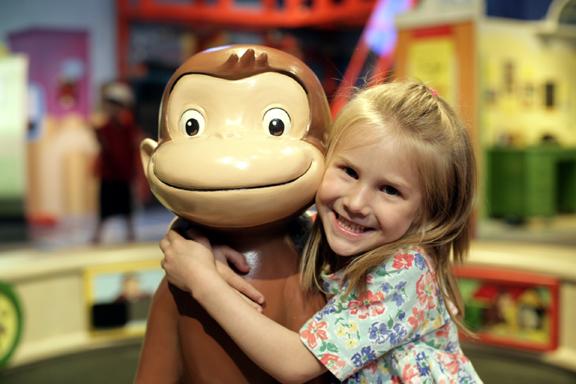 Curious George: Let's Get Curious! at the Family Museum -- June 6 through September 13

With the Bettendorf venue again open to the public and welcoming children of all ages, the Family Museum will house the interactive touring exhibition Curious George: Let's Get Curious! from June 6 through September 13, leading visitors on a fun math-, science-, and engineering-based adventure while emphasizing the central roles played by parents and caregivers.

Let's Get Curious! is based on the familiar Curious George characters in H.A. and Margret Rey’s classic stories and the television series produced by Imagine Entertainment, WGBH Boston, and Universal Studios Family Productions that is the recipient of a Daytime Emmy Award nomination for Outstanding Children’s Animated Program and airs on PBS KIDS. Designed, developed, and built by the Minnesota Children’s Museum in partnership with Universal Studios Consumer Products Group, the nationally touring exhibition encourages children’s natural curiosity as they explore aspects of early science, math, and engineering through hands-on play. The immersive environment of Let's Get Curious! takes place in the land where the feisty chimpanzee Curious George and his best friend The Man with the Yellow Hat live. Insatiably curious, George always finds new things to discover, touch, spill, and chew. And in this Family Museum exhibit, kids get to learn like George – through direct experiences and problem solving.

Eight specific features are included in Curious George: Let's Get Curious! In “Apartment Building,” children operate wheels to move Curious George on pulleys from window to window, and are encouraged to climb up and inside the fire escape to play with color, light and shadow. “Sidewalk Produce Stand” lets kids play customer or salesperson and explore shape, sorting weighing, and counting with fruit and vegetables. In “Construction Site,” museum guests climb into the construction trailer and design a building, then make use of a bounty of building materials and get to work constructing different structures and using machines to move materials. And in the the urban green space of “City Park,” youths can rest as they give a hug to (and take a picture with) a full-size Curious George while the museum's youngest visitors will enjoy busy-wall activities for babies and toddlers. 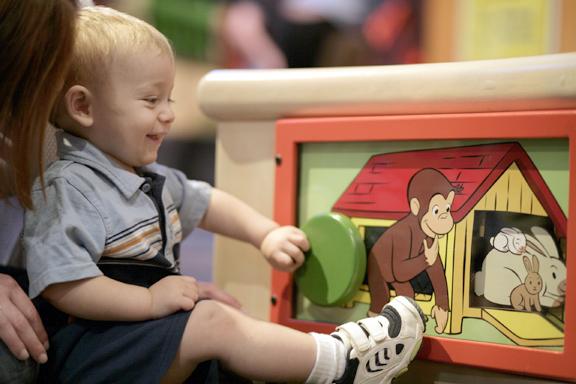 Let's Get Curious!'s “Mini Golf” finds kids using pipes, ramps, funnels, turntables, bumpers, and force to experiment with physics and engineering as they putt through three holes of mini golf. The exhibit's “Space Rocket” feature lets children climb into the rocket Curious George took on his space adventure; they can catch a glimpse of the chimp in his space suit, take a picture from the control station, and e-mail it home. In “Farm,” guests experience cause and effect and use wind power to move yard art including whirligigs, windmills, windsocks, and wind chimes, and kids can even build their own whirligigs or windsocks and care for the farm animals. And in “Museum within the Museum,” fans can learn new things about Curious George by following H.A. and Margret Rey’s work – including the World War II escape from France to safety that saved their original Curious George manuscript – and seeing how the famed chimp's legacy evolved throughout the years.

Family Museum visitors can experience Curious George: Let's Get Curious! from Saturday, June 6, through Sunday, September 13, with regular venue hours Mondays through Saturdays from 9 a.m. to 5 p.m. and Sundays noon to 5 p.m. The exhibit is free with $5-9 general admission, specific guidelines are in place to help ensure the health and safety of visitors and staff, and more information and tickets are available by calling (563)344-4106 or visiting FamilyMuseum.org.