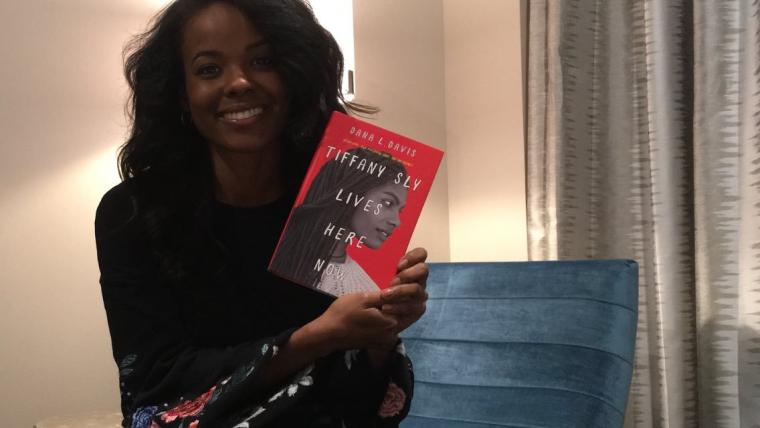 Dana Davis at the Davenport Public Library Fairmount Branch -- May 30.

A television and film star whose credits include Heroes, Veronica Mars, and 10 Things I Hate About You makes a special appearance at the Davenport Public Library's Fairmount Street branch on May 30, when actress, author, and Davenport North High School alumna Dana Davis reads from, discusses, and signs copies of her most recent novel The Voice in My Head, scheduled for release on May 28.

A Davenport native, Davis graduated from North High and went on to attend Loyola Marymount University, where she earned her bachelor's degree in Music in 2006. By that time, she had already also appeared in the films Raise Your Voice and Coach Carter and had appeared on more than a dozen successful TV series, her 2000 appearance on The Steve Harvey Show leading to roles on Boston Public, Malcolm in the Middle, Joan of Arcadia, Gilmore Girls, and Veronica Mars. In 2007, it was announced that Davis would be a new cast member on the second season of NBC's superhero smash Heroes, her Monica Dawson character possessing the gift of “muscle mimicry,” allowing her to instantly master any physical skill she witnesses.

In addition to her role in the 2008 remake of Prom Night, Davis has spent the last decade appearing in a number of beloved television series, among them Criminal Minds, Pushing Daisies, Bones, CSI: Crime Scene Investigation, Glee, Grey's Anatomy, and – recreating the film role originally played by Gabrielle Union – 10 Things I Hate About You. Davis also currently delivers vocal performances for a trio of animated series: Craig of the Creek, Star vs the Forces of Evil, and She-Ra & the Princess of Power. Her debut as a published author came in 2018 with the release of her contemporary YA novel Tiffany Sly Lives Here Now, a work that Kirkus Reviews praised as “a dynamic and honest coming-of-age novel with universal appeal that will especially speak to black girls questioning their place in the world.” With The Voice in My Head being published two days before the author's Davenport return, Davis also volunteers for nonprofits including Empowering Lives International, an organization that provides training, resources, and encouragement to underprivileged East African children. Additionally, Davis created her own nonprofit organization Culture for Kids, LA – an organization that gifts inner-city children tickets and transportation to see performing arts shows around the Los Angeles area.

Dana Davis' May 30 Fairmount Street Library presentation will begin at 6 p.m., and will be led by staff members from LOVE Girls, the local girls-empowerment organization and magazine. Admission to the event is free, and more information is available by calling (563)326-7832 or visiting DavenportLibrary.com.