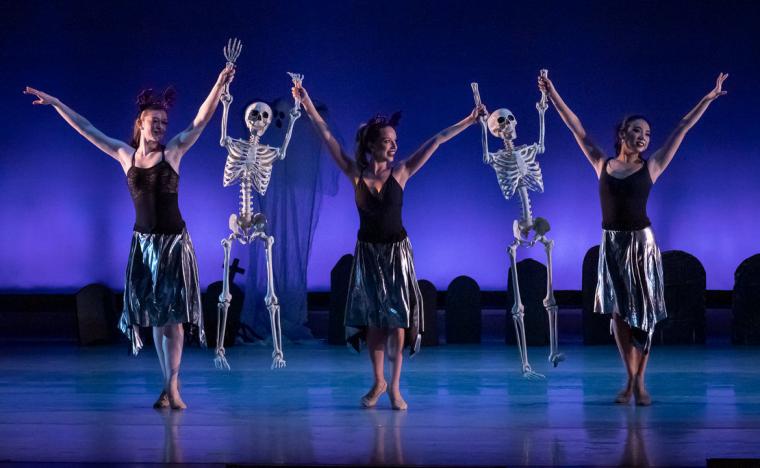 For more than a decade, Rock Island's professional dance company Ballet Quad Cities has traditionally staged, for its October presentation, a one-act production of Dracula, with the titular vampire always played by popular guest artist Domingo Rubio. As Rubio is a resident of Mexico, however, his nearly annual trek to the Quad Cities was impossible in this pandemic year.

But that hasn't stopped Ballet Quad Cities from delivering a different kind of Halloween treat in Dancing for Dracula & You!, a series of holiday-themed vignettes being performed at Davenport's Outing Club on October 30 and 31 (reservations due October 27) – and with Rubio himself making a virtual appearance.

“Right now,” says Ballet Quad Cities' Artistic Director Courtney Lyon, “we're trying to figure out how we can have Dimongo on video. We talk to him every day, because of course he wants to be here, and he wants to connect to his fans. So now it's just about how we're going to connect with him – whether we can actually bring him in through livestream, or whether we'll just have some prerecorded videos where he's talking to the audience and maybe dancing a little bit. So even though Domingo won't be physically present, Dracula himself will be spritually present. He'll be very much a part of the event.”

She adds that the idea of forging ahead with her company's near-yearly Dracula with or without Rubio wasn't really a possibility in 2020. “I think that with Dracula, people know what to expect and what they want when they see it. Dracula needs all the spooky effects, the right lighting … . And right now, of course, securing theatres and trying to figure out if you can put on a performance and make it worthwhile is really difficult.

“But for the past four or five years,” Lyon continues, “we've done an opener for those performances – a pre-show to Dracula. We've called it different things – Halloween Hustle, Frankenstein's Follies – and we treat it like a variety show to feature the dancers' personalities and different skill sets as actors, dancers, and just overall great people. So even though we couldn't do Dracula, we thought, 'You know what we can do? Even if we don't have all the crazy lights, even if we don't have the big stage, we can do the pre-show.

“So what we're doing [for Dancing for Dracula & You!] is a longer version of the kind of pre-show that we'd normally do for Dracula. We've pulled out our favorite little vignettes from the past four years, and we're adding a few more in, and we're making it like a variety show. There's a little theatre, a little dance, a little humor – a little bit of everything.”

Listing some of the the dances being performed in Ballet Quad Cities' hour-long presentation, Lyon says, “We're doing a repeat of a piece we did outside at the Outing Club in September that was very popular. It was actually set at the Outing Club in 1928, and set to the Slaughter on 10th Avenue music with the dancers in complete 1928 attire. It's fabulous.

“We also have a piece that people loved last year with the dancers dressed as mummies and doing a whole dance to 'Footloose.' We have a version of 'Monster Mash' that's a tap piece, but we have women behind gravestones who throw their legs up in the air so it looks like their legs are coming out of the grave. There's 'The Skeleton Waltz,' and that's, I think, five women with five skeletons as their dance partners, and the skeletons break, of course, and don't go where their partners want them to go. We've got 'Love Potion Number Nine,' where a witch with her enormous cauldron puts a love spell on Nick [Bartolitti], and all the ladies come out with their gravestones like the Rockettes... . It's all just really fun, and 100-percent family-friendly.

“And we're indoors, in the ballroom, for this performance. The ballroom usually holds, I think, over 500 people, so we feel like we can give people generous amounts of space. We've limited the number of tickets for sale so people can feel really comfortable, and every party is seated at separate tables. It's a really, really large space, but the experience will be intimate, because you'll be there at one table with your date or your family or whoever you've gone with.

“We've sold out the last six shows we've done at the Outing Club,” says Lyon, “and we've had a really positive experience being there: people really like the atmosphere, they feel comfortable, safety precautions are always in place, the food is great – we just thought we'd keep it going. But what's important to know is that because we have to plan for the dinner, we can't do tickets all the way up until the doors open. We have to cut our ticket sales off on October 27th at noon.

“That's really important for people to know, because some people just feel more comfortable waiting until the last minute. But in this case,” she says with a laugh, “the last minute is noon on the 27th.”

Dancing for Dracula & You! will be performed at Davenport's Outing Club on October 30 and 31, with the three-course dinner served at 6:30 p.m. and the performance starting at 7:30 p.m. Reservations must be made by noon on Tuesday, October 27, and more information and tickets are available by calling (309)786-3779 or visiting BalletQuadCities.com.