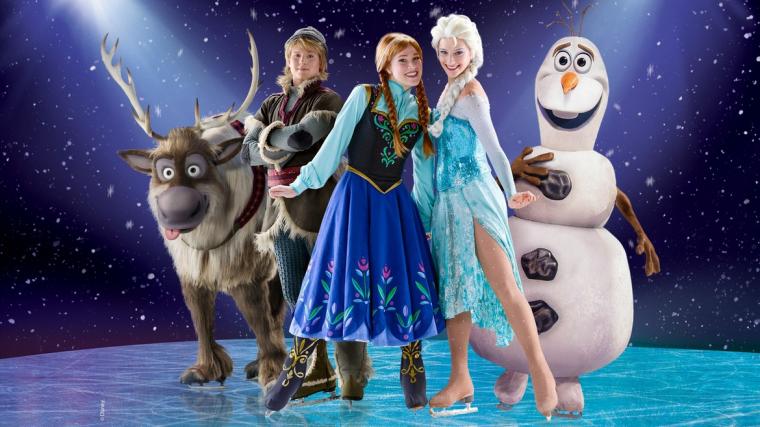 “Disney on Ice: Frozen" at the TaxSlayer Center -- November 29 through December 2.

One of the most popular and beloved animated movies of all time gets a holiday makeover at Moline's TaxSlayer Center from November 29 through December 2, with an Oscar-winning Disney masterpiece turned into an ice-skating spectacle in Disney on Ice: Frozen, a delightful touring adventure featuring Frozen's Anna, Elsa, Olaf, and more singing and skating alongside numerous additional Disney favorites.

Released in 2013, Frozen tells the story of the fearless Princess Anna who sets off on a journey alongside a rugged iceman, his loyal reindeer, and a naïve snowman to find her estranged sister Queen Elsa, whose icy powers have inadvertently trapped their kingdom in eternal winter. With some film critics considering the movie to be Disney's finest animated feature film in decades, Frozen also achieved significant commercial success, earning $1.276 billion in worldwide box office revenue, including more than $400 million in North America and $247 million in Japan. It currently ranks as the highest-grossing animated movie of all time, the 13th-highest-grossing film of all time, and the third-highest-grossing film in Japan.

Frozen also won two Academy Awards (for Best Animated Feature and Original Song “Let It Go”), the Golden Globe and British Academy Award for Best Animated Film, and two Grammy Awards for Best Compilation Soundtrack for Visual Media and Best Song Written for Visual Media, with “Let It Go” reaching the top five on the Billboard Hot 100 and becoming 2014's fifth-best-selling song. In Disney on Ice: Frozen, audiences are invited to be part of Anna’s adventure to find her sister, and join Olaf, Kristoff, and Sven as they encounter wintry conditions and mystical trolls in a race to bring summer back. Hosted by Mickey and Minnie Mouse, families can sing along to unforgettable music and delight in special appearances by the Disney princesses, with characters such as Toy Story's Woody and Buzz and Finding Nemo's Dory also joining in the fun.

With seven performances scheduled between November 29 and December 2, Disney on Ice: Frozen will be presented Thursday through Saturday at 7 p.m., and Saturday and Sunday at 11 a.m. and 3 p.m. Admission is $15-60, and tickets are available by calling (800)745-3000 or visiting TaxSlayerCenter.com.