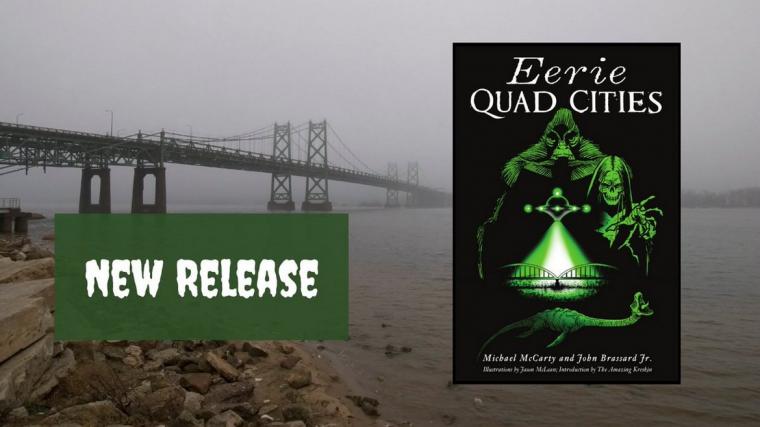 Unusual, fantastical, and downright creepy elements of Quad Cities architecture and culture will be explored in an October 2 book discussion at the Davenport Public Library's Fairmount Street branch, with authors Michael McCarty and John Brassard Jr. highlighting Bigfoot, a banshee, and more in their new publication Eerie Quad Cities.

Like the mighty Mississippi River that cleaves the Quad Cities, the region's history can trap the unwary in some unexpected eddies. In Eerie Quad Cities, readers are invited to peer through the fog of the past to catch a glimpse of the Tinsmith Ghost of Rock Island or the river serpent with a price on its head. They can get the backstory on the Banshee of Brady Street, and read the 1869 report on a Bigfoot sighting near East Davenport. They can run the numbers on local UFO activity. From phantom footsteps in the Renwick Mansion to a mausoleum heist in Chippiannock Cemetery, authors McCarty and Brassard, through their fascinating new collaboration, trace a path through the shadowy heritage of the Quad Cities.

McCarty, a professional writer since 1983, is the author of more than 40 books of fiction and nonfiction, as well as hundreds of articles, short stories, and poems. Among his book titles are Frankenstein's Mistress: I Kissed a Ghoul, and Dusk Duets, and he is a five-time Bram Stoker Award finalist, winning the Midwest Writing Center's David R. Collins Literary Achievement Award in 2008. Among his many works is a book of interviews titled Modern Mythmakers: 35 Interviews with Horror and Science Fiction Writers and Filmmakers, in which McCarty converses with "eerie" genre greats including Ray Bradbury, Dean Koontz, John Carpenter, Richard Matheson, and Elvira.

Brassard is a local author, podcaster, and historian from eastern Iowa. Beyond Eerie Quad Cities, he has written two additional books about the history, legends, and lore of the Quad Cities region: Scott County Cemeteries, co-written with his father John Brassard Sr., and Murder & Mayhem in Scott County, Iowa, co-written by McCarty. Brassard's work has been featured in Iowa History Journal, the Quad-City Times, the North Scott Press, and the DeWitt Observer,. He is also the writer, researcher, and narrator for the Kitchen Table Historian podcast, which tells tales of true crime, the paranormal, and, as Brassard says, "other stories that your grandma didn't want you to hear."

The Fairmount branch's Eerie Quad Cities book discussion takes place at 2 p.m. on October 2, and the program will be held both in person (in the library's SCRA Meeting Room) and virtually (with registration for the Zoom link available on the library's Web site). Participation is free, and more information on the event is available by calling (563)326-7832 and visiting DavenportLibrary.com.