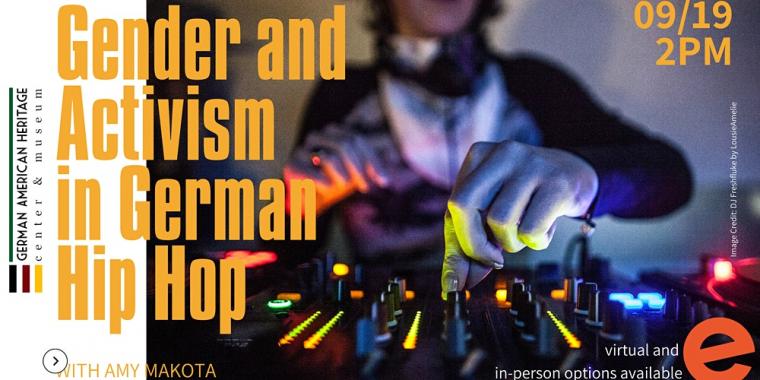 This presentation examines the activism methodologies of women* hip-hop performers in Germany to address the question: "In what ways does German hip-hop activism contribute to and/or realign the social and political landscape of contemporary Germany?" Promoting their chosen socio-political issues through their social-media presences and live performances, these artists also affiliate with public demonstrations against racial and gender discrimination, urban gentrification and LGBTQIA+ inequities. By analyzing the platforms women* hip-hop performers align themselves with, their motivations for public association with their issues, and the particular ways they utilize their art as support, Gender & Activism in German Hip Hop explores the ways these artists' activism furthers their chosen causes while simultaneously exposing tension regarding gender and feminist politics.

Presenter Amy Makota is a doctoral candidate in the Department of Folklore and Ethnomusicology at Indiana University in Bloomington, Indiana. She obtained her 2013 B.A. in English with minors in West European Studies, German, Medieval Studies, and Creative Writing, and her 2017 M.A. in West European Studies. Her interest in Germany began in her youth with the discovery that her paternal ancestors were German-American immigrants. To date, Makota has resided in Berlin during multiple stages of her fieldwork process, with the most recent being in late 2020 and mid-2021. Like her September 19 program for the German American Heritage Center, Makota's forthcoming dissertation focuses on Gender and Activism in German hip hop.

Gender & Activism in German Hip Hop will be presented at 2 p.m. on September 19, and for those interested in an in-person screening of the virtual program, the German American Heritage Center will also host a socially distanced viewing of the online event on the venue's fourth floor. The presentation is available for $5, and more information on the event is available by calling (563)322-8844 and visiting GAHC.org.