Virtual Presentation: “George Davenport & the Founding of the Quad Cities,” May 20 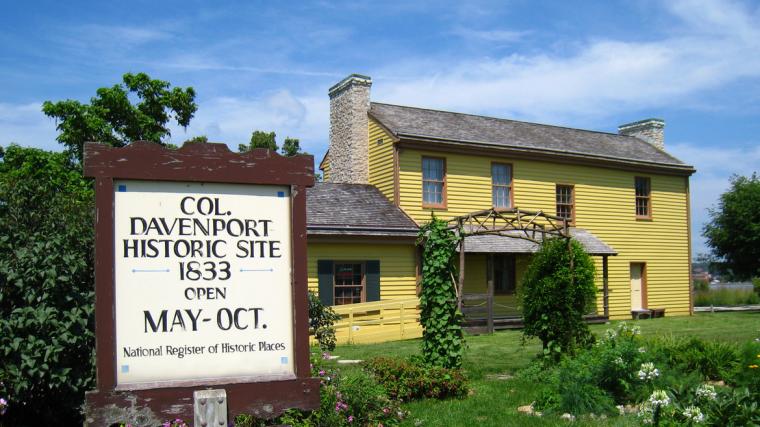 The Bettendorf Public Library presents “George Davenport & the Founding of the Quad Cities" -- May 20.

The life and accomplishments of Quad Cities namesake will be showcased in Bettendorf Public Library's latest virtual presentation in its popular “Community Connections” series, with local historian Gena Schantz, in the May 20 program George Davenport & the Founding of the Quad Cities, tracing Davenport's many careers and examining how he adapted his talents to serve and foster the development of the communities that surrounded him.

Colonel George Davenport, born George William King in 1783, was a 19th-century English-American sailor, frontiersman, fur trader, merchant, postmaster, U.S. Army soldier, Indian agent, and city planner. A prominent and well-known settler in the Iowa Territory, Davenport, in 1833, moved from his double log cabin and built his home on a lower part of Rock Island near the old fort. In 1835, he and six others purchased a large tract of land along the Mississippi River opposite the island. On this site, the town of Davenport, Iowa, was officially founded on February 23, 1836, and two years later, Davenport himself succeeded U.S. Indian agent Joseph M. Street as a representative of the Sauk and Fox until 1840. In 1842, Davenport and several others negotiated a treaty on behalf of Governor John Chambers between the Iowa territorial government and the Sauk and Fox for the sale of their lands in Iowa, and after another three years, Davenport was killed, by burglars at his home, on the fourth of July.

Gena Schantz is a local historian who has presented many programs on the Davenport House, the Davenport Family, Fort Armstrong, and the earliest town foundings surrounding Rock Island. She has been involved with numerous organizations including the Davenport House, Heritage Documentaries, River Action’s Channel Cat Tours, and CommUniversity, and her book The Trader at Rock Island: George Davenport & the Founding of the Quad Cities was published last May. Schantz's work tells the story of Davenport's entry into the Indian trade and his eventual transition into services and businesses marketed toward the new settlers, as well as how, after the Black Hawk War, the man promoted land development as the frontier turned from Indian land to commercial centers of industry.

George Davenport & the Founding of the Quad Cities will be presented in the Bettendorf Public Library's virtual “Community Connections” series at 7 p.m. on May 20, and the free event will take place via GoToMeeting. Registration is required to receive the invitation and password to the program, and more information is available by calling (563)344-4179 or visiting BettendorfLibrary.com.