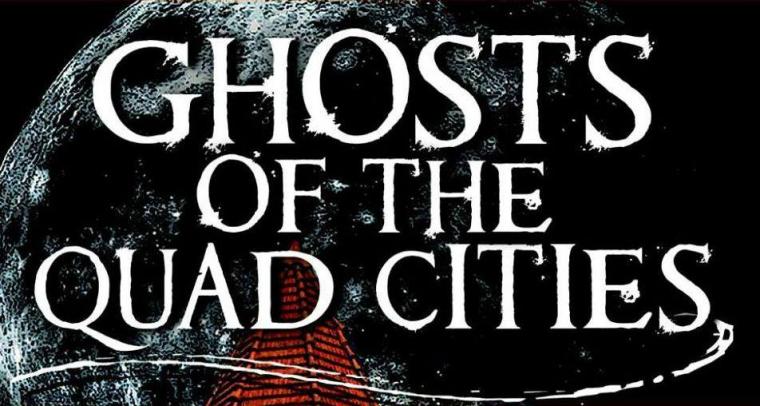 “Ghosts of the Quad Cities” Book Release & Signing at the Book Rack -- September 28.

Arriving in advance of Halloween, the latest book by local authors Michael McCarty and Mark McLaughlin will explore roughly two dozen purportedly haunted locales in Ghosts of the Quad Cities, with the co-writers, on September 28, appearing at Davenport's The Book Rack to sign copies of this new work highlighting the supernatural histories of many of our area's most well-known sites.

Boasting an introduction by famed mentalist The Amazing Kreskin, Ghosts of the Quad Cities opens with a brief history of the community and quickly launches into an exploration of the many venues, buildings, cemeteries, and more – including learning institutions St. Ambrose University and Augustana College – whose grounds, over the decades, have been rumored to be haunted. A dozen sites in Davenport are included in McCarty's and McLaughlin's analysis, among them the Hotel Blackhawk, the Bucktown Center for the Arts, the Oakdale Cemetery, and even Davenport City Hall. Rock Island boasts more than a half-dozen of its own locales for supernatural happenings, with the locations including the Colonel Davenport Home, the Rock Island Arsenal, and the John Looney Mansion, named after the city's notorious gangster from the early 20th Century. Hauntings in Bettendorf and Moline are also featured in Ghosts of the Quad Cities, along with spectral reports from the surrounding communities of Milan and Monmouth, resulting in a book whose local readers, no doubt, will likely have deep familiarity with much of its explored terrain.

McCarty is a five-time Bram Stoker Award finalist and the 2008 winner of the David R. Collins Literary Achievement Award from the Midwest Writing Center, and he has written over 40 books of fiction and nonfiction including I Kissed a Ghoul, A Little Help from My Friends, and Liquid Diet & Midnight Snack. He is also the author of Modern Mythmakers: 35 Interviews with Horror and Science Fiction Writers & Filmmakers, which boasts interviews with such genre icons as Ray Bradbury, Dean Koontz, John Carpenter, Richard Matheson, and Elvira.

McLaughlin is a Bram Stoker Award winner whose writing has appeared in more than 1,000 books, chapbooks, magazines, newspapers, Web sites, and anthologies, among them Writer's Digest, Galaxy, and two volumes of Year's Best Horror Stories. His latest paperback releases include the story collections Horrors & Abominations: 24 Tales of the Cthulhu Mythos and The House of the Ocelot & More Lovecraftian Nightmares, both co-authored by Michael Sheehan Jr. Additional collaborations of McLaughlin's include Monster Behind the Wheel and Dracula Transformed & Other Bloodthirsty Tales, with Ghosts of the Quad Cities's McCarty the co-author of both.

The Ghosts of the Quad Cities book-release event will take place at 2 p.m. on September 28 with authors McCarty and McLaughlin on hand to sign copies, and more information on the day is available by calling The Book Rack at (563)355-2310 or visiting Facebook.com/events/1780654862080253.