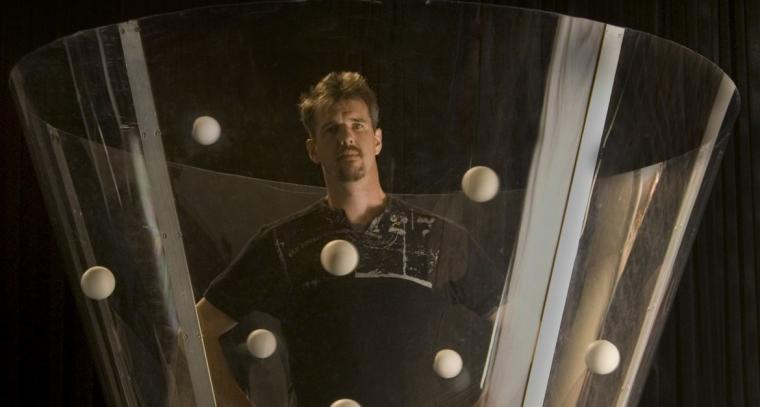 Originally trained as an engineer, Kennedy employs the principles of geometry and physics to create groundbreaking work with original apparatus. As a young artist in the 1990s, he quickly made a name for himself in the juggling community not only by his mastery of traditional juggling technique, but also for creating entirely new forms of manipulation. Kennedy is now renowned for his many original contributions to juggling as an art form, and while fellow jugglers revere him for his award-winning creativity; audiences know him best for his wholly entertaining family performances in which he makes visual spectacles by combining art and science. As Metro USA stated, “In the hands of Greg Kennedy, juggling always looks improbable as he exists within giant, elaborate, magnetic stage sets and dangerously perilous circumstances. He's like the David Blaine of juggling.”

Kennedy spent five years with the legendary circus troupe Cirque du Soleil, performing its stage show Totem over 1,500 times in 25 cities for more than three million people. He twice won the gold medal at the International Jugglers' Association Championships, has performed on five different continents, and has been featured on the cover of Juggle magazine and on The Tonight Show, with his videos having received over two million views on YouTube. His astounding juggling feats have also received critical praise worldwide. The Philadelphia City Paper wrote, ““Kennedy’s pieces have a kinetic beauty, a thrill in the precarious balance of objects in motion,” adding that the artist's performances are “a little bit of wacky and a whole lot of wow.” Jugglers World magazine, meanwhile, raved, “Hs a visionary who can see the possibilities in props and movement that are obscure to the masses,” while Spectacle described a Kennedy show as “A fascinating display that charms and amazes in equal measure.”

Greg Kennedy's public performance will be held at the Spotlight Theatre at 7 p.m. on February 28, with admission $5-10, and more information on Kennedy's visit and other events in the Visiting Artists series is available by calling (309)793-1213 or visiting QuadCityArts.com.