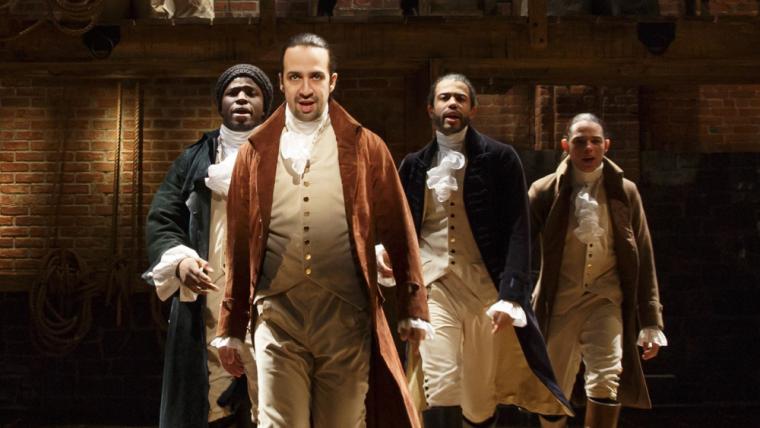 Those who can't get enough of the Broadway musical Hamilton will want to be in the room where it happens (the room where it happens) on December 29, when the Davenport Public Library's Fairmnount Street Branch hosts its first Hamilton Party – a celebration of all things Hamilton featuring activites for all ages and the air filled with memorable tunes from the Grammy-winning soundtrack.

Certainly the most popular and influential American musical of the 21st Century to date, Hamilton is a sung- and rapped-through musical about the life of Founding Father Alexander Hamilton, with its music, lyrics, and book by Lin-Manuel Miranda. Inspired by the 2004 biography Alexander Hamilton by historian Ron Chernow, the show incorporates hip hop, R&B, pop, soul, and traditional show tunes, as well as the color-conscious casting of non-white actors as the Founding Fathers and other historical figures. The musical made its off-Broadway debut in February of 2015, where its engagement was sold out, and subsequently transferred to Broadway that August. With the New York Times calling it “proof that the American musical is not only surviving but also evolving in ways that should allow it to thrive and tranmogrify in years to come,” Hamilton received enthusiastic critical reception and unprecedented advance box office sales, and in 2016, the show received a record-setting 16 Tony Award nominations – winning 11 including Best Musical – as well as the Pulitzer Prize for Drama.

Hamilton's soundtrack, meanwhile, premiered in September of 2015 on NPR's Web site, while its digital release debuted on numerous charts and was released in stores as a two-disc set on October 16. It debuted at number one on Billboard's Top Broadway Albums chart as well as number-three on Top Rap Albums, number-five on Top Digital Albums, and number-nine on the Top Current Albums chart. Hamilton's debut earned the second-biggest first-week sales of a Broadway cast album just behind Rent, and debuted at number 12 on the overall Billboard 200 sales chart; with over 2.1 million streams combined from digital-service providers, it marked the largest streaming debut for a cast album ever. By the end of 2016, it ranked as the year's fifth-best-selling album, and as of July of this year, ithe Hamilton soundtrack was certified 5X-multi-platinum by the RIAA.

Guests at the Fairmount Street Branch's December 29 Hamilton Party can enjoy refreshments while testing their Hamilton and Hamilton knowledge, competing in a “Finish the Lyrics” challenge, playing a few rounds of “A Winter's Ball,” and singing along to the musical soundtrack. Admission to the 3 p.m. event is free, and more information is available by calling (563)326-7832 or visiting DavenportLibrary.com.