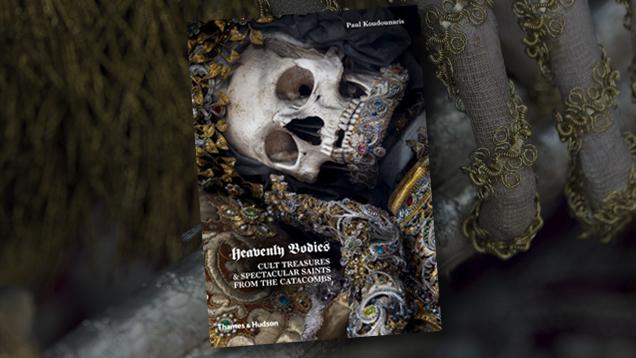 Offering a pre-Halloween treat for art and history lovers, Davenport's German American Heritage Center will, on September 22, present Heavenly Bodies: A Virtual Talk with Photographer Paul Koudounaris, in which the noted author will deliver an online lecture on how he came to photograph intricately adorned skeletons in basilicas across Europe.

In this special program, Koudounaris will discuss his career and 2013 book Heavenly Bodies, which delves deeply into study of obscure macabre art history. The critically acclaimed work tells the forgotten story of a group of skeletons taken from the Roman Catacombs in the 17th century and completely decorated with jewels by teams of nuns. Koudounaris' book describes how these bodies, known as catacomb saints, were identified as Early Christian martyrs, then sent primarily to German-speaking lands where they were decorated and placed into Catholic Churches. Such skeletons were mostly removed and destroyed during the Enlightenment, but Dr. Paul Koudounaris tracked down all the surviving examples and photographed them for his publication. Heavenly Bodies received a tremendous amount of press, and Koudounaris was dubbed "Indiana Bones" by the U.K. press, in reference to his curious and macabre discoveries. Dazed and Confused, meanwhile, named the achievement as one of the 10 best art and photography books of the year.

Based in Los Angeles, Koudounaris has a PhD in art history from UCLA and an international speaking career, and is one of the world’s most popular historians of the eccentric, ephemeral, and macabre. His publications in the field of charnel house and ossuary research have made him a well-known figure in the field of macabre art and art history, and he is also a feline historian whose book A Cat's Tale explored feline history through the voice of his rescue pet, Baba the Cat. A member of The Order of the Good Death, Koudounaris started extensively studying the use of human remains in religious ritual and as a decorative element in sacred spaces in 2006. He subsequently began writing about and photographing them for European newspapers and became an important contributor to magazines that specialize in the paranormal, such as the Fortean Times, covering unusual and spiritual phenomenon surrounding sacred remains throughout the world. In the process, Koudounaris also compiled material for the first-ever history of bone-decorated religious structures, visiting over 70 sites on four continents, some of which had never before been photographed or open to the public.

Heavenly Bodies: A Virtual Talk with Photographer Paul Koudounaris will be presented at 6 p.m. on September 22, participation in the online conversation is free for German American Heritage Center members and $5 for non-members, and more information is available by calling (563)322-8844 and visiting GAHC.org.