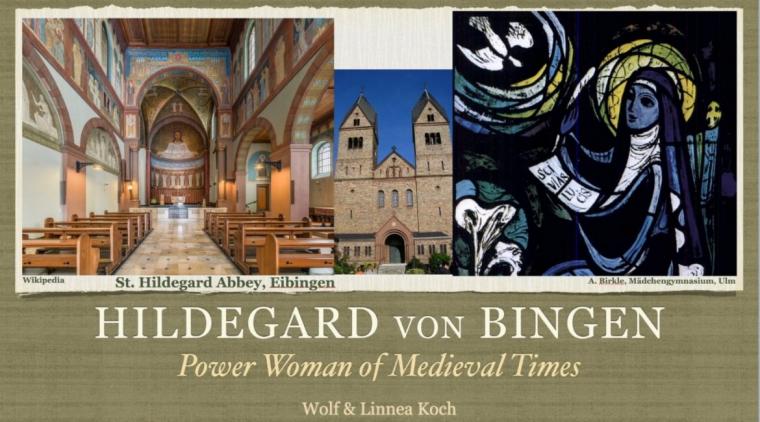 One of the most influential and revered figures in German history will be the focus of a virtual January 31 program when the German American Heritage Center hosts Hildegard von Bingen: Power Woman of Medieval Times, with presenters Wolf and Linnea Koch speaking on the Benedictine abbess, writer, and composer whom Pope Bvenedict XVI named a Doctor of the Church for “her holiness of life and the originality of her teaching.”

Born around the year 1098, although the exact date remains uncertain, Hildegard collected 77 of her lyric poems – each with a musical setting composed by her – in Symphonia armonie celestium revelationum. Her numerous other writings included lives of saints; two treatises on medicine and natural history; and extensive correspondence featuring prophecies and additional allegorical treatises. Throughout her life, she traveled widely throughout Germany, evangelizing to large groups of people about her visions and religious insights. Her earliest biographer proclaimed her a saint, and miracles reported during her life and at her tomb. She was not fully canonized until 2012, however, when Pope Benedict XVI declared her one through the process of “equivalent canonization,” a papal proclamation of canonization based on a standing tradition of popular veneration. Later that year, Benedict also proclaimed Hildegard a Doctor of the Church – one of only four women to have been so named. She is considered a patron saint of musicians and writers.

As one of only a few prominent women in Medieval church history, Hildegard became the subject of increasing interest in the latter half of the 20th century. Her writings were widely translated into English, several recordings of her music were made available, and works of fiction – including Barbara Lachman’s The Journal of Hildegard of Bingen in 1993 and Joan Ohanneson’s Scarlet Music: A Life of Hildegard of Bingen in 1997 – were published. In recent years, Hildegard has also become of particular interest to feminist scholars, who have noted her reference to herself as a member of “the weaker sex” and an unlearned woman incapable of Biblical exegesis. Such sentiments, however, have been considered by many to work to her advantage, because it made her statements that all of her writings and music came from visions of the Divine more believable, giving Hildegard the authority to speak in a time and place where few women were permitted a voice.

Hildegard von Bingen: Power Woman of Medieval Times will be presented via Zoom at 2 p.m. on January 31, and while the event is free to the public, donations are greatly appreciated. For more information on this and additional German American Heritage Center programming, call (563)322-8844 or visit GAHC.org.