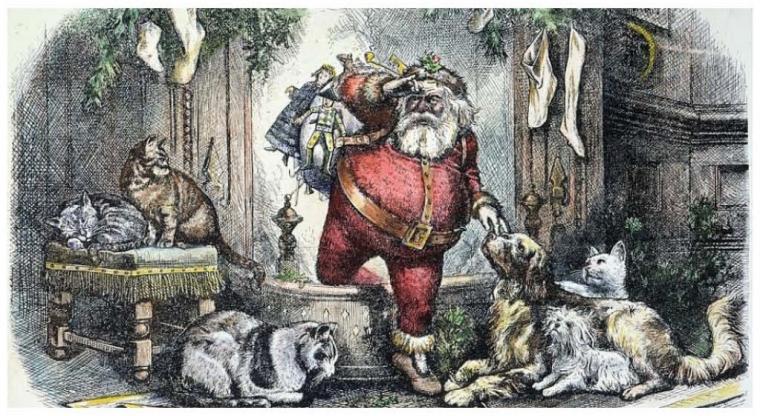 Offering participants a special virtual program in its popular “Community Connections” series, the Bettendorf Public Library invites yuletide revelers to have a jolly old time learning about a jolly old elf in The History & Folklore of Santa Claus, in which Laura Keyes of Historic Voices explores the origins and evolution a figure beloved to children (and more than a few adults) all around the world.

Many people know that our modern-day Santa Claus had his start as St. Nicholas. But what happened on the journey to make us think of a "jolly old elf," rather than a pious Christian Bishop? Where, exactly, did Santa Claus come from, and why does his popularity remain so high in modern American popular culture? The well-researched lecture The History & Folklore of Santa Claus features details on the journey Bishop Nicholas made to become our current-day Santa Claus, and also includes many recognizable images and poems. (Library staffers wish to note that because of certain secrets revealed, the December 7 program is not intended for children for whom Santa Claus is a very real figure.) Keyes, who serves as the program's presenter, graduated from UW-Madison with a Master’s Degree in Library Studies, is a library director in central Illinois, and has been presenting on historic topics for more than 10 years. She also performs one-woman historical pieces on such figures as Mary Todd Lincoln, Mary Harlan Lincoln, and Laura Ingalls Wilder and portrayed suffragist Elizabeth Cady Stanton in an online program the Bettendorf library hosted this past August.

As stated in the encyclopedia Britannica, Santa Claus' "popular image is based on traditions associated with Saint Nicholas, a fourth-century Christian saint. Father Christmas fills the role in many European countries. The Dutch are credited with transporting the legend of Saint Nicholas (Sinterklaas) to New Amsterdam (now New York City), along with the custom of giving gifts and sweets to children on his feast day, December 6. The current depiction of Santa Claus is based on images drawn by cartoonist Thomas Nast for Harper’s Weekly beginning in 1863. Nast’s Santa owed much to the description given in the poem “A Visit from St. Nicholas” (also known as “’Twas the Night Before Christmas”), first published in 1823. The image was further defined by the popular Santa Claus advertisements created for the Coca-Cola Company from 1931 by illustrator Haddon Sundblum.”

Community Connections' The History & Folklore of Santa Claus program will be presented via GoToMeeting at 7 p.m. on December 7, participation is free, and advance registration is required to join the event. For more information, call (563)344-4175 and visit BettendorfLibrary.com.