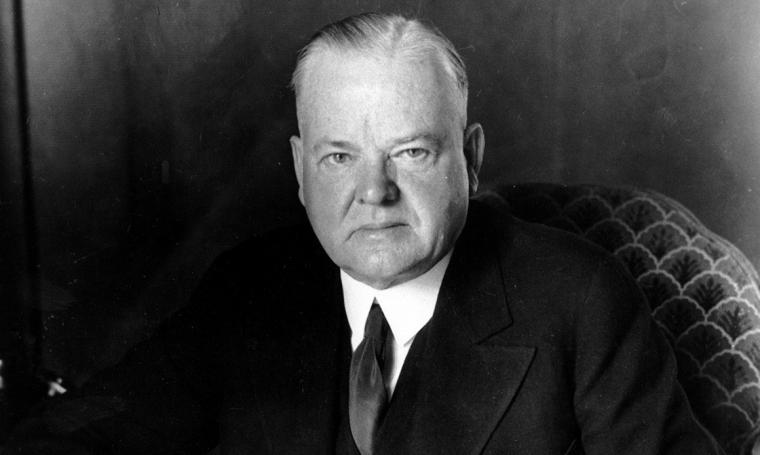 In the Davenport Public Library's latest virtual program in its monthly 3rd Thursday at Hoover's series, the venue will take a look back 57 years – to October 25, 1964 – in the October 21 presentation Hoover's Last Trip Home, which will explore, through archival videos and audio clips, the 31st American president's burial on a hill overlooking his childhood home in West Branch, Iowa.

Hoover was born to a Quaker family in West Branch on August 10, 1874, and when he died, at the age of 90, on October 20 of 1964, the former president was laid to rest five days later in this quiet, grassy hillside. More than 100,000 people lined the funeral procession route from Cedar Rapids to West Branch on that warm fall day. Hoover wrote of West Branch, "My grandparents and my parents came here in a covered wagon. In this community they toiled and worshiped God. The most formative years of my boyhood were spent here. My roots are in this soil." Hoover was honored with a state funeral in which he lay in state in the United States Capitol rotunda, and was finally buried near his presidential library and birthplace on the grounds of the Herbert Hoover National Historic Site.

Iowa architect William Wagner designed the memorial while working closely with the Hoover family to commemorate his life. The two plainly inscribed ledger stones of Vermont white marble are in keeping with the Quaker ideal of simplicity, and across the curved walkway, the American flag waves in tribute. (Hoover famously signed the congressional resolution making "The Star Spangled Banner" the country's national anthem.) Beyond the flagpole, on the horizon at the end of the two rows of trees, is a direct view of the white, wood-frame cottage where Herbert Hoover was born. The first President born west of the Mississippi River, Hoover believed that anyone could start from simple beginnings and achieve great things, and the site's second marble gravestone is for Lou Henry Hoover, the tireless and talented First Lady from Waterloo, Iowa. Following her death in 1944, she was buried in Palo Alto, California, but was moved to rest beside her husband in 1964. Partners in life for almost 45 years, they had both come back at the end to touch the Iowa soil.

The virtual Hoover's Last Trip Home presentation begins at 6 p.m. on October 21, registration is available through the Davenport Public Library Web site, and more information on the free event and the monthly 3rd Thursday at Hoover's series is available by calling (563)326-7832 and visiting DavenportLibrary.com.