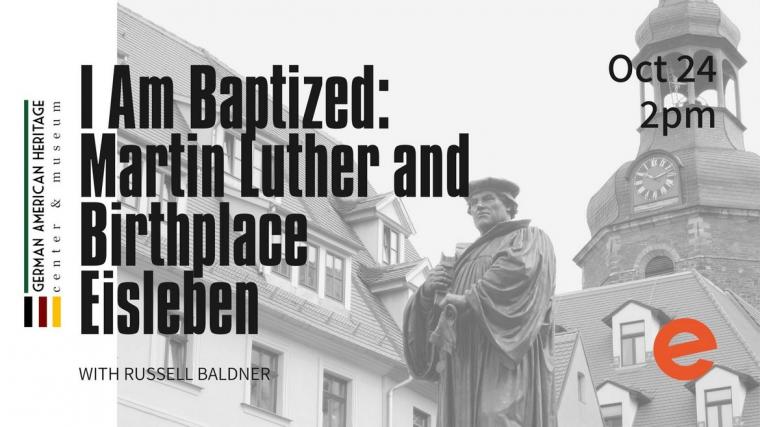 One of history's most noted professors and priests – as well as a seminal figure in the Protestant Reformation who was the namesake of Lutheranism – will be the subject of a virtual October 24 program by the German American Heritage Center, with the Davenport venue hosting noted historian Russell Baldner as he delivers his acclaimed presentation I Am Baptized: Martin Luther & Birthplace Eisleben.

Focusing on the 16th-century Great Reformer and his Geburtshaus birthplace and museum in Eisleben, Germany, I Am Baptized: Martin Luther & Birthplace Eisleben explores Luther's faith and strong sense of baptismal assurance. The program will also highlight the comforting hues and inspiring architectural artistry of the Church of St. Peter and St. Paul, where Luther was baptized on November 11, 1483, in a presentation that features a striking collection of recent on-site photography from Lutherstadt Eisleben. Presented in its original version as an online sermon during a pastoral vacancy and before an empty sanctuary due to the suspension of public worship during the early months of the pandemic, I Am Baptized may have a particularly special appeal for those interested in history, religion, Lutheranism and the Reformation, Germany, art and architecture, biography, and international travel. Its presenter also hopes that the virtual program may also provide a peaceful thoughtful pause and timely note of reassurance.

First presented in 2020, I Am Baptized: Martin Luther & Birthplace Eisleben is but one of numerous historical works, public presentations, and scholarly publications in Lutheran, Reformation, German, ethnic German history, and Late Prehistoric Native American archaeology by Russell Baldner. Among the presenter's earliest forays in primary source historical research were German family documents and the original German manuscripts of his family's longtime Lutheran congregation, of which his immigrant great-great-grandfather was one of the four founding members. Baldner's early affection for the German language and history led to BA and MA degrees in history; undergraduate and graduate study in German; a teaching career in German, history, and anthropology/sociology; a lifetime of academic research in those and related fields; and repeated sojourns in ancestral Germany, the first of which being a summer long residence in his great-great-grandfather's birthplace of wo der gute Wein wächst. Baldner has twice presented for the German American Heritage Center, the first time with Berlin: Before & After the Wall Fell in October of 2019, and again this past April, when he delivered his discussion Witches, Kings, & Architectural Charm: Exploring Folklore, Royal Might, & Half-timbered Splendor in Historic Saxon Germany.

I Am Baptized: Martin Luther & Birthplace Eisleben will be presented at 2 p.m. on October 24, with the virtual program free for German American Heritage Center members and $5 for non-members. Registration is required, and more information is available by calling (563)322-8844 and visiting GAHC.org.