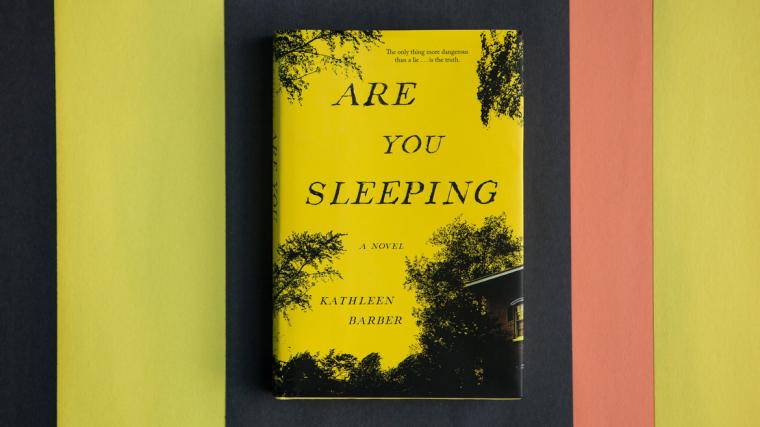 With her debut novel Are You Sleeping described by CrimeByTheBook.com as a work that blends “the compulsively-readable style of authors like Ruth Ware and Clare Mackintosh with a plot that captures the engrossing, very particular style of true-crime podcasts,” Kathleen Barber appears at the Moline Public Library on December 28, an event that will find the author and Galesburg native speaking on her career, her book's success, and its forthcoming adaptation into a 10-episode TV series.

Serial meets Ruth Ware’s In a Dark, Dark Wood in Barber's inventive and twisty psychological thriller Are You Sleeping. In the 2017 novel, Josie Buhrman has spent the last 10 years trying to escape her family’s reputation, and with good reason: Her father was murdered, her mother ran away to join a cult, and her twin sister Lanie – once Josie’s closest friend and confidant – stole her high school sweetheart. Josie has subsequently finally put down roots in New York, settling into domestic life with her partner Caleb, and that’s where she intends to stay. The only problem, however, is that she has lied to Caleb about every detail of her past, starting with her last name.

When investigative reporter Poppy Parnell sets off a media firestorm with a mega-hit podcast that reopens the long-closed case of Josie’s father’s murder, Josie’s carefully constructed world begins to unravel. Meanwhile, the unexpected death of Josie’s long-absent mother forces her to return to her Midwestern hometown where she must confront the demons from her past, and the lies on which she has staked her future. Currently filming for broadcast next year on the impending Apple streaming service, Are You Sleeping was optioned for film by Reese Witherspoon's production company Hello Sunshine, and featured among its lauded cast are Oscar winner Octavia Spencer, Emmy Award winners Aaron Paul and Ron Cephas Jones, Emmy nominees Lizzy Caplan and Elizabeth Perkins, and film stars Mekhi Pfifer and Tracie Thoms.

Author Barber was raised in Galesburg and graduated from the University of Illinois and Northwestern University School of Law. While she previously practiced bankruptcy law at large firms in Chicago and New York, Barber is also a registered yoga teacher and self-described “incurable wanderer” who, when she isn’t writing, enjoys traveling the world with her husband. Are You Sleeping was published on August 1, 2017 by Gallery Books, an imprint of Simon & Schuster, and has also been published by Pan Macmillan in the U.K., Corbaccio in Italy, and Heyne in Germany.

Kathleen Barber will be at the library's Java Lab Grind & Dine Café from 10 to 11 a.m. on December 28, the author's visit is free, and more information is available by calling (309)524-2470 or visiting MolineLibrary.com.