“Krampus: The Roots & Rebirth of the Folkloric Devil,” December 6 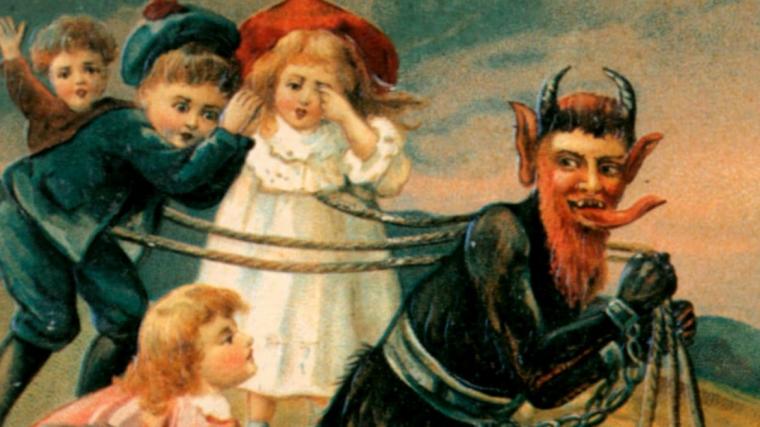 “Krampus: The Roots & Rebirth of the Folkloric Devil" at the German American Heritage Center -- December 6.

For those fascinated by German folklore and its connection to the holiday season, a devilish good time is sure to be had in the German American Heritage Center's December 6 presentation of Krampus: The Roots & Rebirth of the Folkloric Devil, the Davenport venue's virtual program in which historian Al Ridenour will recount the origins and resurgence of this fabled figure in Germany, Austria, and throughout the world.

The disturbing yet fascinating creature known as Krampus is a horned, anthropomorphic figure in Central and Eastern Alpine folklore who, during the Christmas season, scares children who have misbehaved. Considered an evil ally of Saint Nicholas, Krampus historically joins Santa to visit children on the night of December 5, with the jolly old elf rewarding the well-behaved children with modest gifts such as oranges, dried fruit, walnuts, and chocolate, while the badly behaved ones only receive punishment from Krampus administered with birch rods.

Though the origin of the figure is unclear, some folklorists and anthropologists have postulated it as having pre-Christian origins. In traditional parades and in such events as the Krampuslauf (English: Krampus run), young men participate dressed as Krampus and attempt to scare the audience with their antics, such events occurring annually in numerous Alpine towns. Krampus is featured on holiday greeting cards called Krampuskarten, and the wicked figure has subsequently been imported into American popular culture, appearing on TV, in video games, and in movies, including a 2015 horror film starring Adam Scott and Toni Collette fittingly titled Krampus.

In his virtual presentation on December 6, historian Alan Ridenour will provide historical context to the rise of the fabled creature and how its presence in American holiday culture came to be. An artist, journalist, animator, and consummate expert on all things Krampus, Ridenour is also a veteran freelance writer whose work has appeared in the Los Angeles Times, Los Angeles Weekly, New Times, and many other publications, In addition, Ridenour is the head of the Los Angeles chapter of the Cacophony Society, and the transplanted Midwesterner currently makes his home in the Los Angeles area. Signed copies of Ridenour's book The Krampus and the Old, Dark Christmas: Roots & Rebirth of the Folkloric Devil will be available for purchase at the local event.

Krampus: The Roots & Rebirth of the Folkloric Devil will be presented in Davenport on December 6, participation in the 6 p.m. program is free for German American Heritage Center members and $5 for non-members, and more information is available by calling (563)322-8844 and visiting GAHC.org.