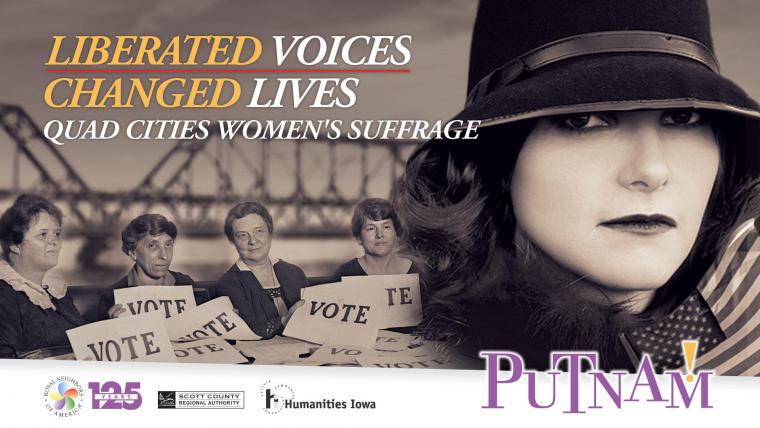 An original exhibition created specifically for the Davenport venue, the Putnam Museum & Science Center's Liberated Voices/Changed Lives will, from March 7 through November 4, celebrate the 100th anniversary of women's right to vote through displays, video presentations, and more, allowing visitors to travel back in time and investigate the roots of the women's-suffrage movement from the perspectives of local women and men from 1900 to 1920.

With Liberated Voices/Changed Lives being exhibited in tandem with the centennial of the 19th Amendment's passage, Christina Kastell, the Putnam's curator of history and anthropology, says, “Of course, it being the 100th anniversary was a huge thing that stimulated us to go ahead and do the exhibit,” adding that the venue was also challenged to create such an exhibition by political activist and former Iowa State Senator Maggie Tinsman. Making the exhibit specific to the Quad Cities, however, was an idea launched by the project's executive committee. “We had people from the community that we worked with,” says Kastell, “including a professor from Augustana, librarians from three of the local libraries, and a variety of people from other interested groups. So we all threw in ideas of individuals who we thought were good possibilities to focus on, and then we whittled it down from there.”

Among the Quad Citians whom Liberated Voices/Changed Lives will pay tribute to in video reenactments are Davenport's African-American women's-rights leader Francis Baker, Moline-based factory owner and inventor Eldorado Jones, and Mabel Palmer, the Quad Cities' “First Lady of Chiropractic.” But Kastell adds that designing an exhibit on women's suffrage with a specifically local bent came with a unique set of challenges.

“The Quad Cities is a little bit different than other areas in terms of suffrage,” says Kastell, “because there were the German immigrants here, the brewers, who wanted to continue brewing beer – and tied in with suffrage was the idea of prohibition. So there were issues, locally, about suffrage, because so much of the population did not want prohibition, and because of that, so many women did not identify themselves as being suffragettes. Some of them, in fact, identified themselves as being anti-suffrage – that would be women like Alice French – but either way, not many women would go on-record saying that they were for suffrage. So what we did for the exhibit was we took a look at some of the women who we thought ought to be for suffrage, which was how we came up with some of the names.”

Beyond celebrating noted women of the period, Liberated Voices/Changed Lives will feature numerous artifacts designed to flesh out the experience of the suffragette movement and the fight for women's voting rights.

“We decided that we were also going to focus on how innovation gave women the time to actually get out in the community and work,” says Kastell. “Around the late 1800s early 1900s, there were a lot of inventions created for household use to make the work that women had to do quicker – an electric iron versus the old heat-on-the-stove types of irons, for example. And the telephone was a huge invention that helped stimulate women's ability to organize. You'll find a lot of those inventions featured in this exhibit.

“And we also looked at the role that the media had to play,” she continues. “There are some amazing anti- and pro-suffrage cartoons that were published in newspapers and in magazines like Puck. So the exhibit also looks at the verbage that was being bandied about. The anti-suffrage sentiment is the more interesting of the two,” Kastell says with a laugh, “but we're looking at the pro-suffrage works, too.”

Women's attire of the period will also be a Liberated Voices/Changed Lives focal point. “We'll have some contrasting costumes,” says Kastell, “with a couple of dresses from before suffrage and a couple from after. And we'll be doing the same with undergarments, because the undergarments change hugely, too. After suffrage, of course, the corset isn't worn anymore.”

Summarizing the appeal of the Putnam's new exhibit, Kastell says, “I think I'd like visitors to take away an appreciation for the bold women who stepped out of their comfort zones, in some cases, to get suffrage for all of us. One other interesting thing we're doing is in our final section 'Where Are We Now?' We're going to be looking at what women have achieved and what we have yet to achieve, and we'll be having a straw poll for the equal-rights amendment where people can vote on whether they are in favor of the Equal Rights Amendment or opposed to it.” With a laugh, Kastell adds, “I think that should be interesting.”

Liberated Voices/Changed Lives will be on display at the Putnam Museum & Science Center March 7 through November 4, with regular venue hours Mondays through Saturdays from 10 a.m. to 5 p.m. and Sundays from noon to 5 p.m. Entrance to the exhibit is free with $8-9 venue admission, and more information is available by calling (563)324-0049 or visiting Putnam.org.