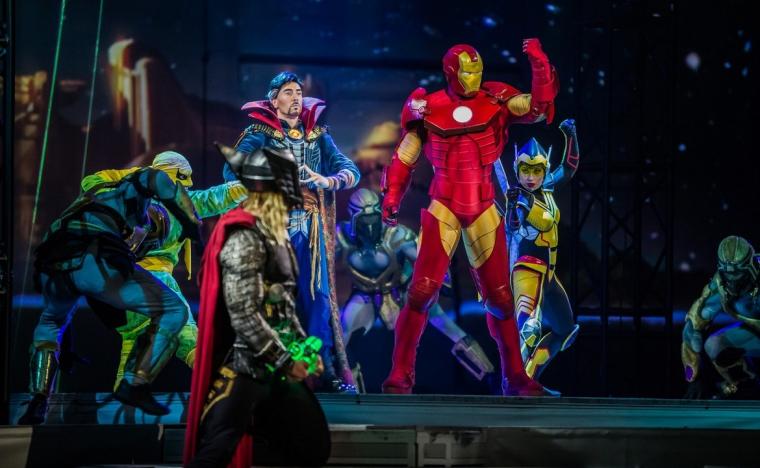 Marvel Universe Live!: Age of Heroes at the TaxSlayer Center -- August 31 through September 2.

The ultimate live-action comic book presented in arena-stage format, Marvel Universe! Live: Age of Heroes blasts its way into Moline's TaxSlayer Center August 31 through September 2, treating family audiences to an exhilarating, stunt-filled production boasting wondrous visual effects and many of the most heroic and villainous characters found in the Marvel canon.

Arriving on the heels of this summer's movie smash Avengers: Infinity War, Field Entertainment's Marvel Universe Live! Age of Heroes unites Spider-Man, the Avengers, the Guardians of the Galaxy, and Doctor Strange in a race against time to recover the Wand of Watoomb – an ancient artifact that would allow the nefarious Loki to crown himself ruler of the universe. Employing a cast of aerialists, acrobats, and motorcycle riders to portray the show's heroes and villains, Age of Heroes transports audiences through the Savage Land to New York City and beyond, with the jaw-dropping effects on display including Spider-Man's web-shooters, the levitation of Doctor Strange and Iron Man, and the transformation of Bruce Banner into the Hulk. Thor, Black Panther, Black Widow, and favorite Guardians including Groot and Rocket Raccoon join in the action, with Loki joined in his malicious quest by costumed antagonists including the Green Goblin, Rhino, Lizard, and Electro.

TechSavvyMama.com raved, “In an age where it seems like our kids are glued to their screens, Marvel Universe Live! Age of Heroes is family friendly live entertainment that immerses families in non-stop action. With movie-style thrills that keep you on the edge of your seats from start to finish, the vast projection mapping, remarkable pyrotechnics and cutting-edge special effects add to the story and enhance every scene in the live action show.” And according to TheHealthyMouse.com, “With a cast featuring over 25 Marvel characters, you never know who will be coming in to help, or harm, the mission of the Avengers. The excitement never ends, and it even proved to be enough to keep my two-and-a-half year-old daughter rapt in attention.”