Miracle at the Freight House, through January 24 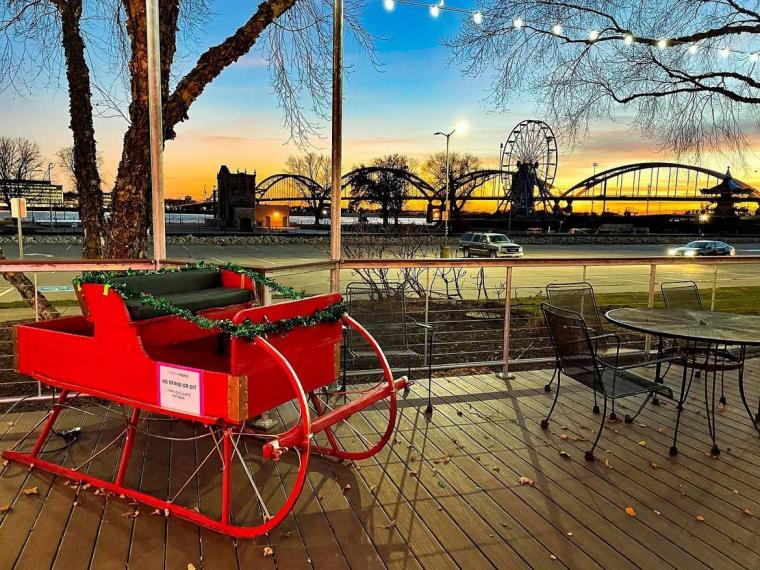 Miracle at the Freight House -- through January 24.

Lars Rehnberg, vice-president for Davenport's seasonal tavern Miracle at the Freight House, discussed the pop-up venue's origins, operations, and challenges in this pandemic year, along with the yuletide décor that might make Disneyland only the second-happiest place on Earth. We spoke on Wednesday, December 2.

The Beginnings of a Miracle

Cocktail Kingdom is the parent company of the Miracle franchise, and the story goes that the owner of Cocktail Kingdom was looking to open his very first bar in New York City [in 2014], which as you can imagine involved lot of red tape and hurdles. So his timeline got delayed, and he ended up in a real pinch where he couldn't get into the space until, like, the middle of November. And he knew that the holiday season is huge. You can make most of your money for the year in the month of December.

But his family knew his situation, and his mom, who is Jewish, came up with the idea for a Christmas bar. (Laughs.) She also very cleverly said, “Don't build it out. Do a pop-up. Just decorate the heck out of it. Make it like a cross between Macy's Christmas and your living room.” So he did, and it went crazy that first year – and now we're in year seven, and there are 118 Miracles in seven countries.

Bringing a Miracle to Iowa

Miracle is in a lot of metro markets like Chicago and L.A. and places in Florida – I mean, they're all over the place, really. But this is Iowa's first.

Our company president Ethan [Bailey] had been wanting to do a Miracle literally since the first one, because he works for Cocktail Kingdom – that's his day job. So he knew about this franchise for years and had always wanted to do one. It was just a matter of finding the right partners and the right space and the right time to do it.

When the idea of the “quarantine bubble” came around, Ethan and I, who are like best buddies, were in this bubble together. He's a mixologist – he's always making fresh new cocktail recipes and testing them out on me. And I was learning about mixology from him because I had all kinds of free time; I was an event worker, and I hadn't worked since February. So it was August, and we had all this time, and then Festival of Trees got canceled, and we started to think about Miracle. We were like, “Well, this thing would be on a much smaller scale … !”

And the COVID curve looked good at the time. If you go back and you look, it looked like we were going to have a COVID-free holiday season. Like, safety measures were working and we were going to get back to normal. So we committed to do this in August, with Ethan and president and me and my wife Karah as vice-presidents. We thought we could do it.

And we are doing it, of course. (Laughs.) But at a much reduced capacity. 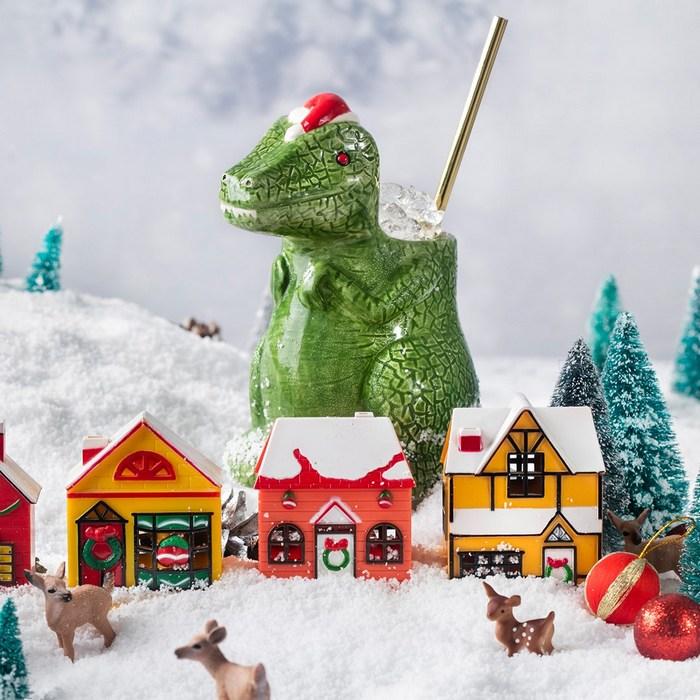 By the time the curve started going up again, we had already signed a lease, and the machinery that goes into getting a liquor-license alone takes so much work … . So we were already fully committed to this. I mean, we made a gamble, a little bit, that the curve would continue to go down, and America let us down. (Laughs.) I'm kidding. I'm sorry, America. We love you. We love some of you. (Laughs.)

So then we had to start thinking about reduced capacity and safety protocols, because we weren't going to have the Miracle we thought we were gonna have. And we started studying, like, “How do you actually keep people safe?” And the answer that I found over and over again was air. It's all about the air transmission.

In hospitals, they have their HVAC systems set up to fully exchange the air with fresh air six times per hour. That's a lot of air, and we didn't have a hospital-grade system here. But the City of Davenport's maintenance department did come down and replace the filter for our HVAC, so there's a brand-new filter there. And then we said, “Okay, how many air purifiers do we need to add to this setup to kind of hit that 'hospital' mark, and how good do they have to be?” So we got these very expensive, high-volume air purifiers. We're still following the sanitizing procedures, as well, of course, even though the new science is showing that contact is not as big a deal as we thought it was for spreading the virus. But it certainly doesn't hurt. (Laughs.)

Another tool we've been using is OpenTable. It's a restaurant reservation system – it's kind of like the Ferrari of reservation systems – and they made the product free this year as a boon to small businesses. It has a very sophisticated algorithm, and it does things like placing people at opposite ends of the restaurants, spacing people's times out so we can see how full it's going to be at any one time … And when you sign up for reservations, the app tries to nudge you to times so there's as few people in the restaurant as possible. If we get really full, and we're hoping to get really full, we're still not going to break our cap. Like, typically you could fit in over 100 people in here. We're at 40 seats. And if we have to have a line out the door, that's fine; we'll bring in a tent and a heater for people.

Nothing is perfectly safe, of course. But we feel that we're hitting every possible bullet point that we can to keep it safe. 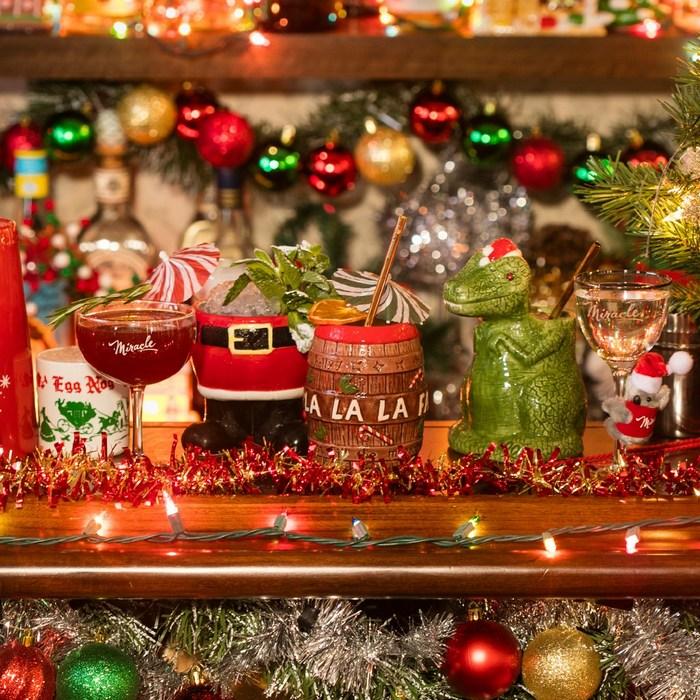 Miracle provides some parts of the franchise. They give you some guidance on how it should look and feel, and then they manufacture all of the custom glassware, which is one of the great features, because each custom cocktail has its own special glass that it comes in. But we do all the décor. This is all us. And there's kind of a fun story behind how we got all this.

A friend of a friend bought a home in Davenport that was previously the home of a collector who had left behind her entire Christmas collection. It was all these animatronics, and this upside-down tree, and a lot of Santas, and a Nativity scene that lights up … . All this cool, weird stuff came from this one house, including the one-horse open sleigh that we we have outside that we stripped down and sanded and repainted and restored. So we got in touch with the lady who owned everything, and she was like, “Will you please just haul this stuff away? I'll keep, like, the 12 things I like, but please take the rest away.”

It was four van loads of stuff, and we tried to pay her some cash for this, but she said no. So I was like, “Okay, well, I've been doing Mexican cooking in quarantine – can I make you a batch of pico de gallo for it?” (Laughs.) And she loved that. So I literally paid for all of the coolest stuff we have in pico de gallo. 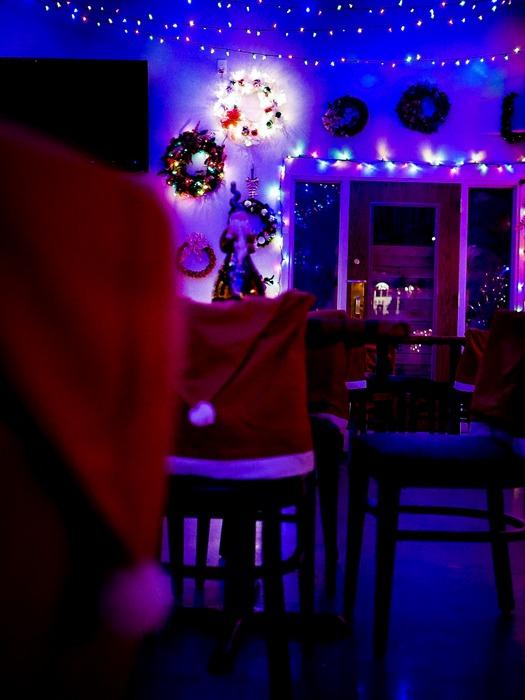 In the Market for a Miracle

Business has been slow but steady so far. But we also did a soft opening. We didn't have any press at the beginning because we wanted to get our systems in place, get all of our recipes together, get our staff trained … . We had some friends-and-family nights, and then we just pushed it out on social media to let traffic sort of trickle in slowly and through word of mouth, and it's been great. All of our Saturdays in December are quite booked, and our Fridays, as well. We'd like to see more people on weeknights, though. So come on down! (Laughs.) We're open seven days a week. The only day we're closed this whole month in Christmas Day.

The Christmapolitan is probably our number-one seller. It's delicious, and I don't even like Cosmopolitans. (Laughs.) My personal favorite is the Snowball Old-Fashioned, which is a more straightforward drink, and we've been selling a lot of those. But some of them are wildly complex. Like the Fruitcake Flip has 25 ingredients. The Yippie Ki Yay Motherf----r is a blend of five rums. The On Dasher mixes bourbon, mezcal, vermouth, hibiscus, and lemon. It's just really unique.

They each have their own custom glassware, their own custom ice, their own special garnish … . And what was hard to do in responding to the curve going back up was thinking about, “Wow, we really need to go curbside.” We needed to speed up an online-ordering portal, and develop things in a way so people could recreate these complex cocktails at home.

So what we did is fill a bottle that has the complete mix – all the alcohol and all the flavors and ingredients – and then you get a coffee cup that has the specialty ice that goes with that drink, and on top of the ice is the garnish. You can actually pull it apart and reassemble it at home, and if you want, you can also order the glassware to go with the experience. And we found that we can get them out the door really fast. Our turnaround time on the to-go orders is about 10 minutes, and I'm so glad that we can offer that, because there are people who want to try these but don't want to go out these days. And I don't blame them. Not at all.

Our wanting to do this came from a good place, I think, because the reason we committed to it was “We all need something cheerful this year.” You know? And Ethan, from experience, knew how happy this place makes people. I mean, normally you'd do it up with live entertainment, and you'd have elves running around, and we had to strike a bunch of that because of COVID. We had to reduce the program. But that's all right. Next year. And we're very happy with what we have. We think the Quad Cities is a perfect market for Miracle.