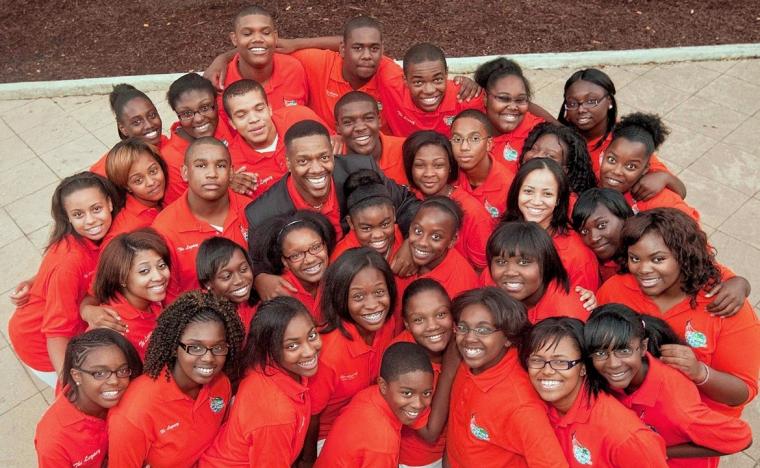 With this year's annual community event themed “Rise” – taken from the famed quote “I have a dream that one day this nation will rise up” – Augustana College's 2020 Martin Luther King Jr. Celebration will be held in the college's Centennial Hall on January 18, its evening of art, poetry, dance, and music highlighted by a special visit from the young vocal talents of the Soul Children of Chicago.

A performance group whose mission is to use music “as the motivator and catalyst to inspire young people throughout the world to have faith in themselves, each other and God,” the Soul Children of Chicago is a non-denominational, non-profit educational organization directed by the Windy City's Walter Whitman. With its singers ranging in age from eight to 18, the group, now in its 30th year of performance, regularly tours the United States and Europe, performed at President Barack Obama's second inauguration festivities, and, on one occasion, even sang backup for Whitney Houston and Mariah Carey on The Oprah Winfrey Show. Since the release of 1990's This Is the Day, the Soul Children of Chicago has also released nine albums of gospel favorites and original compositions.

As detailed at SoulChildrenChicago.org, the vocalists' mission statement is stated as follows: “Today's youth face a world wrought with violence, drugs, teen pregnancy, and poverty. High school graduation rates are dropping, while teen pregnancy rates are increasing. A staggering one in four women get pregnant before they are 20 years old. Today, a child is more likely to come from a single-parent home than to go on to graduate college – and more likely to go to jail than to graduate school. It is no wonder that suicide has become the third-leading cause of death in 15-24-year-olds in America. Mr. Walter Whitman and the Soul Children of Chicago are dedicated to encouraging our youth and providing hope and inspiration in a world filled with challenges and despair.” GospelFlava.com writes of the group, “To claim that Walt Whitman and the Soul Children of Chicago are a topnotch children's gospel choir would be a great understatement,” adding that they “have stepped beyond to reside in the upper ranks of gospel music excellence. Period.”

Augustana's Martin Luther King Jr. Celebration featuring the Soul Children of Chicago commences at 6 p.m. on January 18, admission is free, and more information on the event is available by calling (309)794-7306 or visiting Augustana.edu.