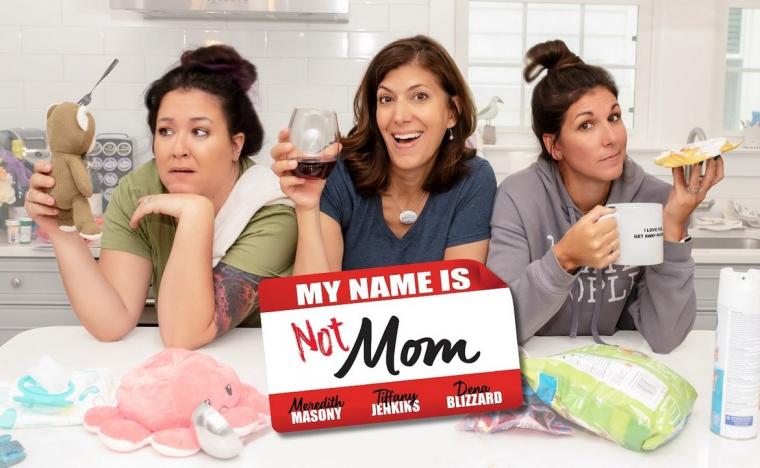 "My Name is NOT Mom" at the Adler Theatre -- September 12

A trio of riotous Internet sensations take to the stage on September 12 when bloggers, podcasters, and truth-tellers Tiffany Jenkins, Meredith Masony, and Dena Blizzard team up for the Adler Theatre's touring presentation My Name Is NOT Mom, the Davenport venue's live comedy event for anyone who has children, knows people who have children, or were once children themselves.

A hilarious journey through motherhood in which fans can lighten up and let loose with the ladies who are helping them get through the pandemic, the comedic trio behind My Name is NOT Mom will share their takes on mothering through the sleepless nights of the toddler years, the trials of middle school madness, and an occasional temptation to physically attack their high schoolers. The unique live event will feature stand-up, stories, and videos from the online community, as well as a great deal of audience interaction, to create an up-close and personal experience that will leave fans laughing the night away.

My Name Is NOT Mom's powerhouses of comedy were united by their common approach of being honest about motherhood. No matter where you are on your motherhood journey, every mom has felt the stab of being called “Mom!” at least 46 times a day. On September 12, Quad Cities audiences are invited to discover how laughter has helped these moms raise (mostly, but not all the time) great kids, all while maintaining some sense of themselves. For those who might have been locked up for over a year and for anyone who is finally due for a night out with girlfriends, My Name Is NOT Mom is a must-see.

Tiffany Jenkins is the funny lady behind the blog Juggling the Jenkins who currently has more than seven million followers across all platforms. A wife, mother, best-selling author, content creator, and recovering addict, Jenkins is perhaps best known for her funny viral parenting videos, and is incredibly passionate about bringing awareness to addiction and mental illness. Tiffany believes the women share the same outlook when it comes to the necessity of incorporating humor into parenting because "if we aren't laughing, then we will cry. A lot."She can be followed on Instagram (@jugglingthejenkins) and on Facebook (@jugglingthejenkins1).

The creator of the video series That's Inappropriate, Meredith Masony is a wife to one, a mother to three, and the emotional support person to two dogs. Masony has over four million followers across social media platforms as a result of her unfiltered and somewhat chaotic parenting journey, in which, as she says, "Life isn't supposed to be easy, but at least we can find the funny." She states that she, Jenkins, and Blizzard have found friendship due to their similar takes on life, comedy, and doing their best to stay out of jail "… because kids, and well, husbands." She enjoys accepting followers on Facebook (@meredithmasony) and Instagram (@thats_inappropriate).

Dena Blizzard is a comedian, mother of three, and creator of One Funny Mother, an Off-Broadway show and media company dedicated to celebrating wine, women, and laughing 'til your face hurts. She is also a viral video star widely known for Back to School Rant and Chardonnay Go, which is now a board game for "Wine Lovers, Moms, and Other Shameless People.” Blizzard enjoys making videos about the plight of women and drinking wine on the internet. Her daily Facebook Live show, One Funny Morning, has over 25,000 daily viewers, and she enjoys eating gluten-free lasagna. The comedian can be followed on Twitter (@OneFunnyMother), Instagram (@onefunnymother), and Facebook (@onefunnymother).