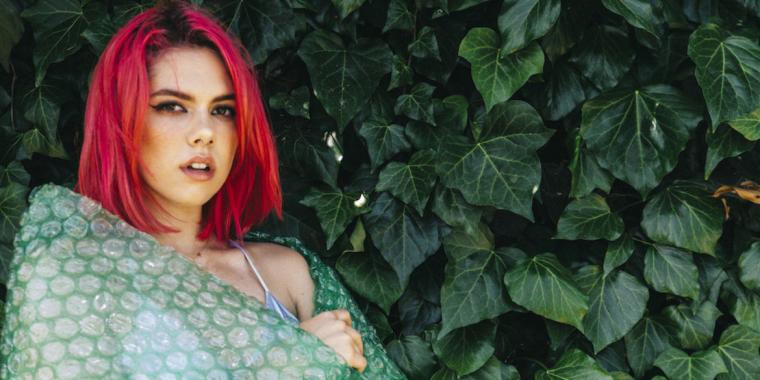 Caly Bevier in the girlpARTs Fest at the River Music Experience -- October 26.

Hosted by the NormaLeah Ovarian Cancer Initiative in Rock Island, a celebration of music, art, and community awareness takes place at Davenport's River Music Experience on October 26 in the third girlpARTs Fest – an afternoon/evening boasting two dozen singularly designed bodices on display and a headliner performance by 20-year-old Caly Bevier, an ovarian-cancer survivor and semi-finalist on NBC's America's Got Talent.

“I'm a big arts advocate,” says Jodie Kavensky, chief organizer for the event and the founder and CEO of NormaLeah. “I sit on the Illinois Arts Council and I'm on the mayor's arts advisory board, and I've just been involved in the arts for years and years. And I was looking for a different way to present this information to the community – that all women are at risk for ovarian cancer, and that you don't have to have ovaries to get ovarian cancer. Even if your ovaries have been removed, you're still at risk. So we wanted celebrate survivorship and also make it an arts event, because we have such a vibrant arts community.”

As the art in “girlpARTs” is capitalized, it makes sense that visual arts will be represented at the festival, and after being on display at various locations through the community from September 15 to October 15, the 24 specially designed bodices by area artisans will be gathered for the first time at the RME. Nearly two dozen local talents employed their gifts for the 2019 bodice project: Samantha Beitzel, Bolkcom Cathy, Ellie DeMay, Gina Kirschbaum, Laney Krebs, Diana Kreider, Carolyn Krueger, Kimberly Kruse, Lisa Mahar, Molly McGuire, Angela Moody, Kristin Nguyen, Jeanne O'Melia, Kelli Roeling, Rowan Schussheim-Anderson (who contributed two bodices), Tony Seabolt, Natalie Sereda, Julie Smith, Jessica Wahlen, Susan Wahlmann, Mary Wells, Amber Williams, and Debbie Weindruch. After their public viewing at the October 26 girlpARTs fest, all 24 will be available for purchase in an online auction (commencing on November 1) at BiddingOwl.com/normaleah.

With KWQC's Paula Sands, herself a cancer survivor, serving as the event's host and Jim Hampton and Decker Ploehn as emcees, girlpARTs will also boast a musical lineup featuring local bands Owl Creek Collective, Yo Yo y Yo, and Douglas & Tucker. Special visiting guest artist Caly Bevier, meanwhile, became a national sensation after she was diagnosed with stage-three ovarian cancer at age 15. Her video rendition of Rachel Platten's “Fight Song” went viral within a day of its release, scoring hundreds of thousands of views in 24 hours, and led to a booking on The Ellen DeGeneres Show, where the host brought out Platten herself to sing with Bevier, resulting in another viral video clip. This, in turn, led to her appearance on America's Got Talent, where Bevier received the prized “Golden Buzzer” from Simon Cowell and advanced all the way to the show's semi-finals.

Having since shared bills with the likes of John Legend, Kevin Hart, and Earth, Wind, & Fire, Bevier is currently residing in Los Angeles, working on material for her debut album. Regarding the booking of the singer/songwriter for this year's fundraising event, Kavensky says, “We had done a girlPARTS fest in Cleveland in 2016 when Caly was on America's Got Talent and had spoken with her about it at that time, and she was going to be part of that girlpARTs. However, because of her success with America's Got Talent, she was not available. So we reached out again, and we're really excited about her coming out for this one.”

With the October 26 girlpARTs festival also featuring an artists' market and art raffle, Kavensky says that she hopes it speaks to the RME's guests in ways that linger beyond the hours of the event. “People need to know that when it comes to a cancer diagnosis,” says Kavensky, “art can be healing.”

The NormaLeah Ovarian Cancer Initiative presents its girlpARTSs fest beginning at 4 p.m. on October 26, admission to the event is $10 with ages 12 and under free, and more information is available by calling (309)794-0009 or visiting NormaLeah.org.