Virtual Presentation: “The Origins of the Presidential Cabinet,” January 21 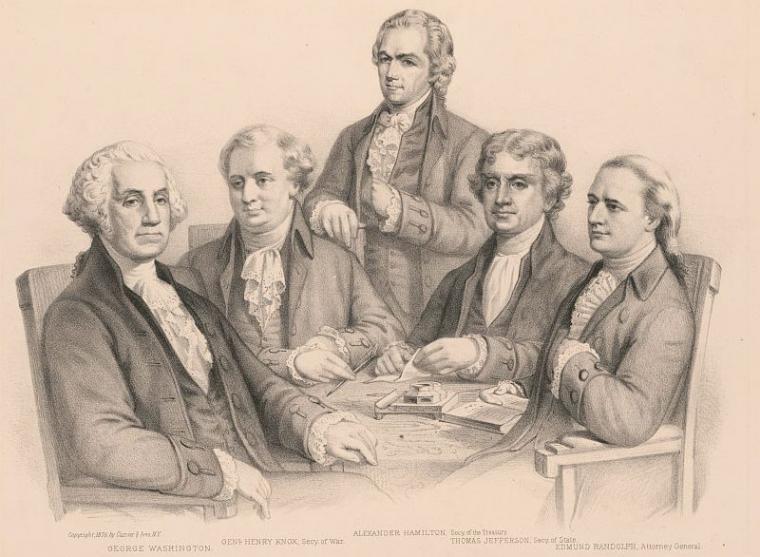 The Davenport Public Library presents “The Origins of the Presidential Cabinet" -- January 21.

Delivered as part of the Davenport Public Library's virtual 3rd Thursday at Hoover's Presidential Library & Museum programming, historian Dr. Lindsay Chervinsky will present the January 21 Zoom webinar The Origins of the Presidential Cabinet, an inside look at an institution that isn't isn't the Constitution, but has been a crucial political element for every American president since George Washington.

The tradition of the Cabinet arose out of the debates at the 1787 Constitutional Convention regarding whether the president would exercise executive authority solely or collaboratively with a cabinet of ministers or a privy council. As a result of the debates, Article II, Section 1, Clause 1 of the Constitution vests “all executive power” in the president singly, and in Section 2, it authorizes, but does not compel, the president to “require the Opinion, in writing, of the principal Officer in each of the executive Departments, upon any Subject relating to the Duties of their respective Offices.” The Constitution does not, however, specify what the executive departments will be, how many there will be, or what their duties will be.

George Washington organized his principal officers into a Cabinet, and it has been part of the executive branch structure ever since. Washington's Cabinet consisted of five members: himself, Secretary of State Thomas Jefferson, Secretary of the Treasury Alexander Hamilton, Secretary of War Henry Knox, and Attorney General Edmund Randolph. Vice President John Adams was not included in Washington's Cabinet because the position was initially regarded as a legislative officer (president of the Senate), and it was not until the 20th century that vice presidents were regularly included as members of the Cabinet and came to be regarded primarily as a member of the executive branch.

In the Origins of the Presidential Cabinet program, Dr. Lindsay Chervinsky will present on the beginnings of the president's cabinet, how Washington drew on his leadership practices from the Revolutionary War to shape this institution, and the important and often-overlooked legacy he left for his successors. She will also explore some of the best and worst cabinets in American history, share how the institution has evolved over time, and explore why the cabinet still matters today. Dr. Chervinsky is an expert in the cabinet, presidential history, and U.S. government institutions, and she is currently serving as Scholar in Residence at the Institute for Thomas Paine Studies at Iona College and Senior Fellow at the International Center for Jefferson Studies.

The Origins of the Presidential Cabinet will be presented via Zoom webinar at 6 p.m. on January 21, the event is free to the public, and registration is available through the Davenport Public Library Web site. For more information on Dr. Lindsay Chervinsky's program and the monthly 3rd Thursday at Hoover's series, call (563)326-7832 or visit DavenportLibrary.com.