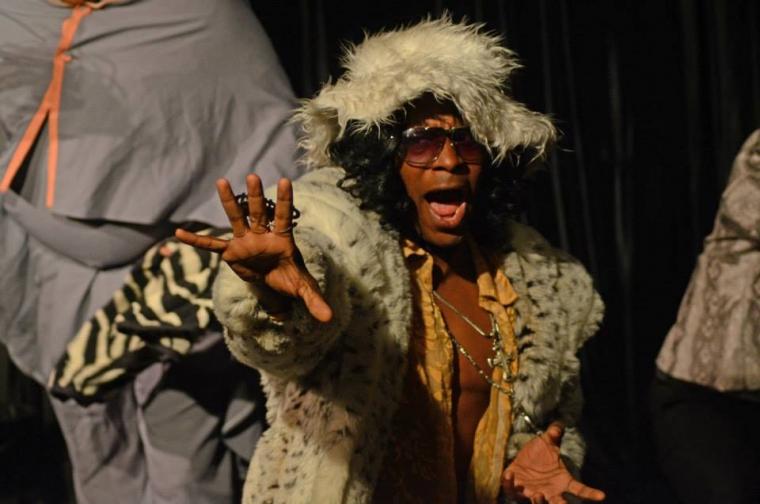 With the Chicago Tribune calling their performances “politically incorrect and funny” and the Charleston City Paper adding that the cast “has funny going on before they even open their mouths,” the Chicago-based comedians of Pimprov bring their sketch-comedy skills, acting talent, and significant bling to the Circa '21 Speakeasy on November 24, demonstrating why the Los Angeles Times calls their set “not your traditional improv.”

In daily life, Pimprov comedians Marz Timms, Mark Bratton, Joe Henry, and Keith Smitherman have held jobs as, respectively, a police officer, a computer technician, a firefighter, and a community coordinator for a head-start program. But all four are also veterans of Chicago improv-comedy outlets such as Second City, I.O., and Annoyance Theatre, and decided to combine their talents for an experiment they titled Pimprov, which is exactly what its name implies: “pimps” performing improv. In the cast members' roles as Ho' Lease, Poochie, Grand Finale, and Timepiece – four Windy City pimps who took comedy classes at Second City on accident – the Pimprov ensemble brings political incorrectness and outrageous costumes to the stage in a night of unpredictable comedy and audience interaction. The formula, since 2003, has proven to be an amazing success.

Originating 15 years ago as the only all-black improv group in Chicago, the Pimprov comedians enjoyed occasional comedy-festival appearances and area bookings before landing at Chicago's Chemically Imbalanced Comedy Theater, where they were given a regular booking and continue to perform every Friday night. Yet they have also spent the last 10 years making tour stops throughout the country and wowing reviewers in the process, with the Chicago Reader calling Pimprov “highly recommended” and Now Magazine Toronto joining in the fun by deeming the group “Ho'larious.”

“Art is supposed to be free – creative and stuff,” Smitherman said to The A.V. Club. “But improv is kind of stuffy and has a lot of rules and things that you’re supposed to follow. The good thing about our act is that we can break all those rules without people thinking less of us. We make a point of pointing them out and making fun of the conventions.”