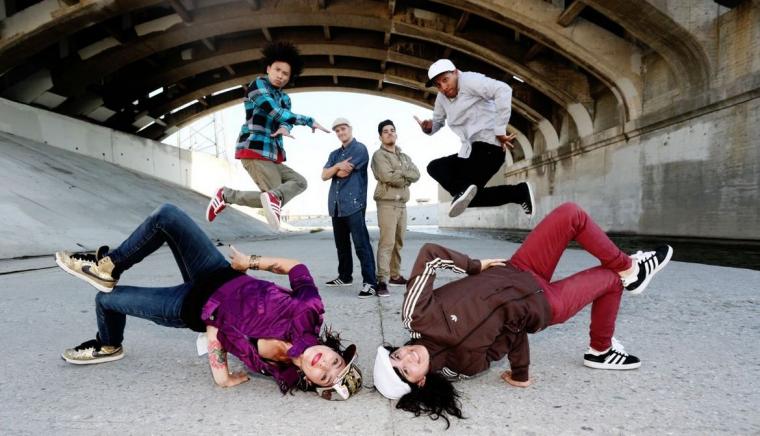 Lauded by the Los Angels Times as a hip-hop dance ensemble that's “able to use spins and locking to convey everything from grief to animalism to wisdom,” the touring talents of Antics serve as the latest guests in Quad City Arts' Visiting Artists series, their February 2 engagement at St. Ambrose University demonstrating why a recent performance inspired Explore Dance to rave, “Windmills, acrobatic back-flips, and uprock that oozed attitude were some of the dazzling dance feats on display.”

Founded in 2007 by Artistic Director Amy “Catfox” Campion after she graduated from UCLA’s Department of World Arts and Cultures, Antics is a hip-hop dance-theatre company based in Los Angeles. Dedicated to creating multimedia dance performances that incorporate street dance, poetry, theatre, and film into provocative and daring experiences, the gifted young members of Antics tell stories using the movement vocabulary of street dance styles including bboying/bgirling, krump dance, house dance, locking, popping, waacking, and capoeira. Antics' dancers represent the best in Los Angeles, with extensive credits that include major films, TV shows, and music videos, and the ensemble is committed to innovating the realm of hip-hop dance theatre as well as uplifting the community through residencies, workshops, and special events.

Antics has performed extensively in and around Los Angeles at venues including the University of Southern California, Loyola Marymount University, the Los Angeles Theater Center, and the Bootleg Theater Dance Festival, and has toured throughout California to perform at the San Francisco Hip Hop Dance Fest, the Esalen International Arts Festival, and College of the Sequoias in Visalia. The group's hoofers have also performed nationally in dance festivals in New York, Texas, Oregon, Washington, Wyoming, Pennsylvania, and Minnesota, and Antics' work has been featured on television and online on Ovation TV, Strife TV, Spike TV, BuzzFeed, and PBS. They've also earned consistent critical praise, with Explore Dance labeling Antics “a dazzlingly diverse and impressive ensemble which took street dance to another level.”