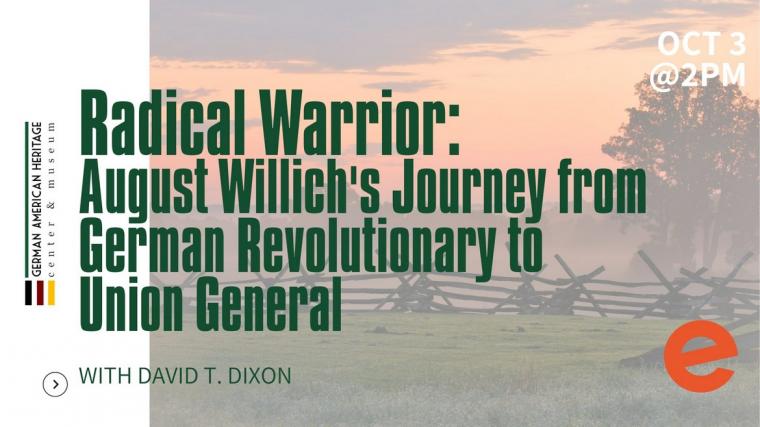 On October 3, the incredible true story of a noted Prussian army general who became a heroic American army general will be explored at the German American Heritage Center, with the Davenport venue hosting a book discussion with acclaimed author David T. Dixon as he discusses his recent publication Radical Warrior: August Wilich's Journey from German Revolutionary to Union General.

Released in 2020, Radical Warrior is the biography of a Prussian army officer who renounced his nobility and joined in the failed European revolutions of 1848. He emigrated to America, edited a daily labor newspaper in Cincinnati, and went on to become one of the most accomplished generals in the Union Army, and in addition to exploring Wilich's character, the book sheds new light on the contributions of 200,000 German-Americans who fought for the Union in the Civil War. In an age of global social, economic, and political upheaval, transatlantic radicals helped affect America’s second great revolution. For many recent immigrants, the nature and implications of that revolution turned not on Lincoln’s conservative goal of maintaining the national Union, but on issues of social justice, including slavery, free labor, and popular self-government. The Civil War was not simply a war to end sectional divides, but to restore the soul of the nation, revive the hopes of democrats worldwide, and defend human rights. Transatlantic radicals such as Willich, meanwhile, viewed the war as part of a much larger, global revolution for social justice and republican government.

Author David T. Dixon earned his M.A. in history from the University of Massachusetts in 2003. His first book, The Lost Gettysburg Address, told the unusual life story of Texas slaveholder Charles Anderson, whose speech followed Lincoln’s at Gettysburg, but was never published, having finally turned up 140 years later in a cardboard box in Wyoming. Dixon has given nearly 100 talks to audiences across the country, and has appeared on Civil War Talk Radio and other podcasts. He also hosts B-List History, a Web site that features obscure characters and their compelling stories.

Dixon's and the German American Heritage Center's Radical Warrior: August Wilich's Journey from German Revolutionary to Union General discussion begins at 2 p.m. on October 3, and admission to the in-person, socially distanced program is free for Heritage Center members and $5 for non-members. For more information and to register, call (563)322-8844 and visit GAHC.org.