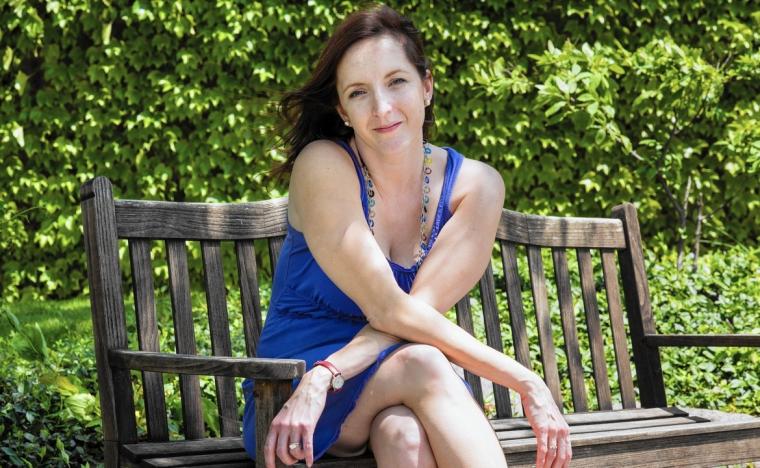 Appearing locally to discuss her most recent book, 2019's Pulitzer Prize nominee The Great Believers, Chicago-based author Rebecca Makkai delivers a presentation at the Moline Public Library on September 9, the New York Times Book Review having called her latest literary triumph “an absorbing and emotionally riveting story about what it's like to live during times of crisis.”

A novelist and short-story writer who grew up in Lake Bluff, Illinois and received her master's degree from Vermont's prestigious Bread Loaf School of English at Middlebury College, Makkai had short works anthologized in The Best American Short Stories for 2008, 2009, 2010 and 2011, and her nonfiction has appeared in Harpers and on Salon.com and the New Yorker Web site. Makkai's stories have also been featured on Public Radio International's Selected Shorts and NPR's This American Life, and her own short-story collection Music for Wartime was published by Viking in June of 2015. A Publishers Weekly rave stated, “Though these stories alternate in time between WWII and the present day, they all are set, as described in the story 'Exposition,' within 'the borders of the human heart' – a terrain that their author maps uncommonly well.” The Kansas City Star, meanwhile, wrote, “If any short-story writer can be considered a rock star of the genre, it's Rebecca Makkai.”

Her first novel The Borrower, released in June of 2011 and consequently translated into seven languages, was a Booklist Top 10 Debut, an Indie Next pick, an O Magazine selection, and one of Chicago Magazine's choices for best fiction of 2011. Her second novel The Hundred-Year House, set in the northern suburbs of Chicago, was published in 2014, received rave reviews in Booklist, Publishers Weekly, and Library Journal, won the 2015 Novel of the Year citation from the Chicago Writers Association, and was named a best book of 2014 by BookPage. As for Makkai's latest novel The Great Believers, which focuses on the AIDS epidemic in 1980s Chicago, it won the 2019 Andrew Carnegie Medal for Excellence in Fiction, the Los Angeles Times Book Prize, the ALA Stonewall Award, and the Chicago Review of Books Award. The Great Believers also made Makkai a finalist for the Pulitzer Prize in Fiction and the 2019 National Book Award for Fiction, with The Guardian lauding the work as “a deeply affecting novel that is full of death, yet simultaneously spirited and hopeful about love and life.”

Rebecca Makkai visits the Moline Public Library on September 9, admission to her 6:30 p.m. presentation is free, and more information on the evening is available by calling (309)524-2440 or visiting MolineLibrary.com.