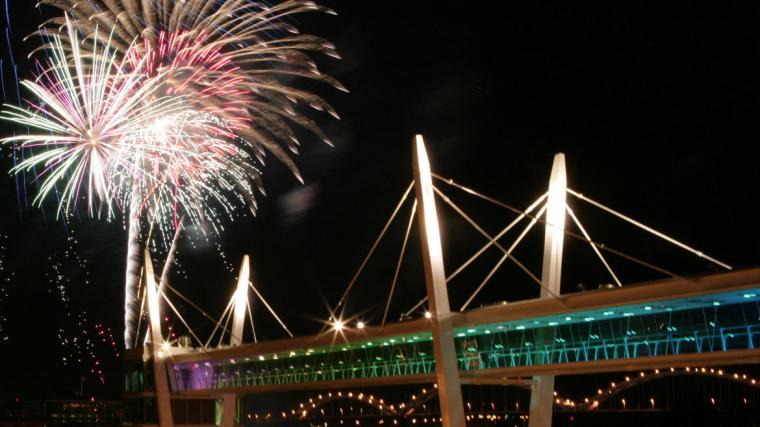 Annual explosions of fun followed by literal explosions in the air will be taking place in Davenport's LeClaire Park and Quinlan Court and Rock Island's Schwiebert Riverfront Park when the Quad Cities hosts its Fourth of July celebration Red, White, & Boom!, the bi-state July 3 event delivering a spectacular fireworks display over the Mississippi River as well as live music, food and beverage vendors, special presentations, family programming, and more.

In LeClaire Park, the 12-piece classic-rock band Identity Crisis will take to the bandshell stage for a free performance from 6 to 9:30 p.m., with the Davenport Park and Recreation Kids Zone offering such activities as yard games, bounce houses, a NASCAR simulator, and a misting station. Magician David Casas will perform live 15-minute shows on the hour from 6 to 8 p.m., while food trucks will be stationed on Beiderbecke Drive with food items including BBQ, funnel cakes, ice cream, brats, walking tacos and kettle corn.

At the nearby Quinlan Court, the Red, White and Bags! double-elimination tournament, from 11 a.m. to 8 p.m., will be open to teams of two ages 18 and older, with guests also invited to enjoy live music from the Panic River Band from 2 to 5 p.m., as well as beverages from Front Street Brewery and snacks from a number of food trucks.

In Schwiebert Riverfront Park, DJ Jeff James will provide live music from 5 to 7 p.m., with the '80s tribute band Class of ‘82 taking the stage at 7 p.m.. Kids activities will include face-painting and balloon animals, as well as glow merchandise for sale, while Bent River Brewing Co will host a beer garden alongside a wide variety of food options from local vendors.

Meanwhile, several additional locales with serve as sites for fireworks shot from two barges in the middle of the Mississippi River. At the Freight Street Farmer's Market in Davenport, visitors are invited check out favorite local vendors selling freshly grown vegetables and homemade treats, while in the parking lot, guests can enjoy Iowa’s History on the Move Mobile Museum from 10 a.m. to 9 p.m., the free exhibit focused on Iowa people and places. The city's Bechtel Park will also be hosting fireworks viewing beginning at 9:30 p.m., and in Davenport's Modern Woodmen Park, the annual display will follow that evening's 6 p.m. Quad Cities River Bandits game against the Peoria Chiefs.

Red, White, & Boom! is presented by the City of Davenport and the City of Rock Island, and supported by the Downtown Davenport Partnership (an affiliate of the Quad Cities Chamber), KWQC, 97X, the Quad-City Times and Dispatch/Argus, St Ambrose University, the Riverfront Improvement Commission, and Upper Mississippi Fleeting. For more information on all the locations and events associated with this year's Red, White, & Boom!, visit RedWhiteAndBoomQC.org.