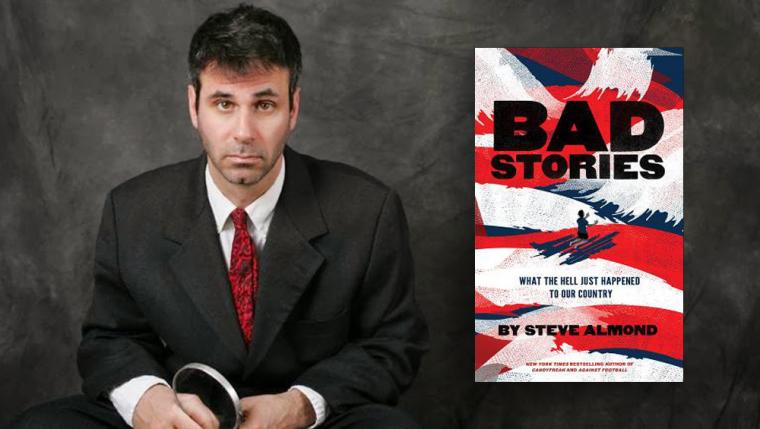 With his 2018 book Bad Stories: What the Hell Just Happened to This Country? described by the Washington Post as “lively, stimulating, and pleasantly discursive,” author, pundit, and podcaster Steve Almond serves as the latest guest in Augustana College's River Readings series, his April 9 presentation demonstrating the talents that have won Almond the Blue Mesa Review's Poetry Prize, the New Delta Review's Editors' Choice Prize, and the 2017 Poetry International Prize.

Raised in Palo Alto, California, and a graduate of Wesleyan University now living in Massachusetts, Almost spent seven years as a newspaper reporter mostly in El Paso and at the Miami New Times, and debuted his first collection of short stories in 2002's My Life in Heavy Metal. Almond's debut novel Candyfreak: A Journey through the Chocolate Underbelly of America followed in 2004, and the book went on to become a New York Times best-seller, win the American Library Association Alex Award, and find itself named the Booksense Adult Nonfiction Book of the Year. With eight works of nonfiction and four short-story collections now behind him, Almond's works have now been published in half a dozen foreign countries and translated into German, Dutch, Spanish, and Croatian. He has also published more than 150 stories in magazines such as Tin House, Playboy, Zoetrope, and Ploughshares, and his story "Donkey Greedy, Donkey Gets Punched" was selected for The Best American Short Stories 2010 and has been optioned for film by Spilt Milk Entertainment.

Famed for his four years hosting the New York Times podcast Dear Sugars opposite author Cheryl Strayed (the subject of the Reese Witherspoon drama Wild), Almond is a regular correspondent on NPR's Here & Now and has appeared as a guest on the podcast WTF with Marc Maron. Almond's 2014 book Against Football: One Fan's Reluctant Manifesto, which documented the author's growing disillusionment with the sport, derived from two pieces written for the New York Times, and during a 2014 interview with Newsmax, Almond encouraged the public to join him in boycotting the Super Bowl because of the risks involved to the players with respect to brain injuries. The author is also an outspoken critic of the current Administration, and Bad Stories: What the Hell Just Happened to This Country? led the Washington Post to deem Almond “an excellent prose stylist” whose “book is a welcome change of pace from its mostly wonky competitors.”

Steve Almond will read from his works on April 9 at 5 p.m. in Augustana's Wallenberg Hall, a reception and book signing will be held after the presentation, and more information on the free event is available by calling (309)794-7384 or visiting Augustana.edu/arts-river-readings.