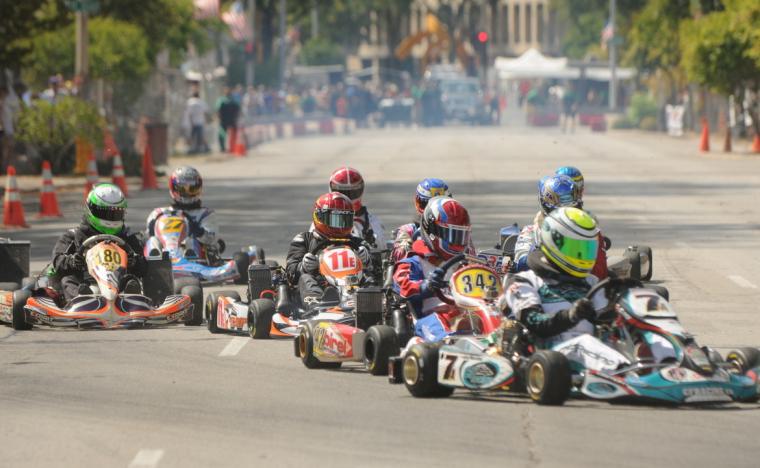 An annual Labor Day-weekend tradition blasts into the District of Rock Island in this year's Xstream Rock Island Grand Prix, the September 1 and 2 event in which thousands will cheer as hundreds of racing kart drivers traverse the tree-lined streets at speeds close to 100 MPH.

Established in 1994, and held all but one year since, the Rock Island Grand Prix is one of the premier professional karting events in the world. Drivers from coast to coast and Canada, Mexico, France, Colombia, England, Poland, Costa Rica, Argentina, Bermuda, Italy, Poland, and the Philippines have participated in what has become one of the largest and most popular kart-racing events in North America. Each year more than 250 race teams set up shop in downtown Rock Island for a chance to win in dozens of individual racing categories, with the family-friendly event combining the thrill of professional racing with the energy of a District summertime festival.

Ten years ago, the Phillipines' Michele Bumgarner became the first female driver to win at the Rock Island Grand Prix, emerging victorious in the TAG Senior Race. Californian Alex Speed won the coveted “King of the Streets” crown and took home a $4,000 prize, while Iowa's Johnny Johnson won the TAG SuperPro class and Steve Kilsdonk durvived several on-track accidents to win the four-cycle Rumble at the Rock race. In 2015, Tony Neilson of Delmar, Iowa, won a single-session record six events, surpassing the previous record of five set in 1998. And at last year's Rock Island Grand Prix, Neilson tied Cal Stewart with three race wins each, although their shared success came at one another's expense, the racers having competed against each other in six separate classes.

Practice rounds for the Xstream Rock Island Grand Prix begin at 8 a.m. on both September 1 and 2, with the District's marketplace vendors open for business at 10 a.m., and the annual awards ceremony scheduled for 7 p.m. on Sunday at the Rock Island Holiday Inn. Both evenings of the Grand Prix will also boast evening concerts held outside the Rock Island Brewing Company: Cinderella's Tom Kiefer plays the 97X 40th Anniversary Party with guests Lava Rock on September 1, and the rockers of Sumac, Infernal Coil, and Jon Mueller take the outdoor stage on September 2.

Admission to the Xstream Rock Island Grand Prix is free, with daily admission of $10 for those entering the race-course pits, and more information on the weekend is available by visiting RockIslandGrandPrix.com.