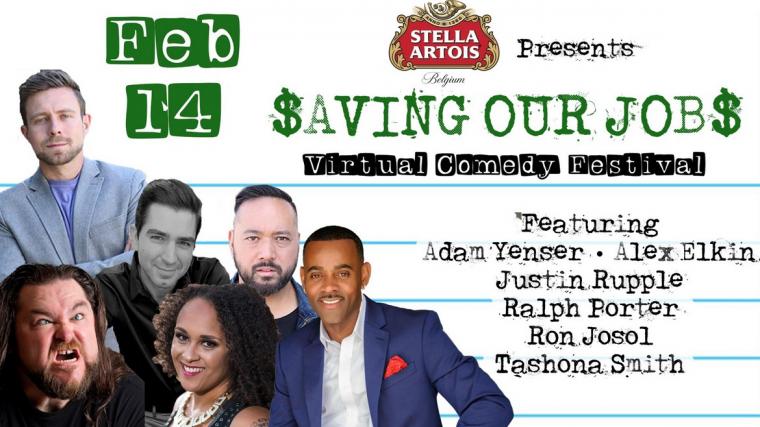 A hilarious day-long event with a serious purpose, the Stella Artori presentation Saving Our Job$ Virtual Comedy Festival will, on February 14, be hosted by Coralville's Xtream Arena & GreenState Family Fieldhouse and presented locally by Iowa City's Big Grove Brewery, with the online Valentine's Day celebration boasting national and international touring comedians, as well as serving as a fundraiser for Spectra venues all across North America.

Among the festival's scheduled comedians, Adam Yenser is an Emmy Award-winning writer for The Ellen DeGeneres Show, in which he regularly appears in the segment “Kevin the Cashier Played by Adam.” Yenser has also appeared on Conan and FOX Laughs; has written for the Oscars and Saturday Night Live's “Weekend Update”; and co-produced the Web series Laugh Lessons with Kevin Nealon.

Also participating in the Saving Our Job$ Virtual Comedy Festival: Alex Elkin, the winner of the 41st Annual International San Francisco Comedy Competition whose comedy recording Screaming at Shapes debuted at number six on iTunes; Justin Rupple, a comedian and impersonator who appeared in First Impressions with Dana Carvey and the films Spider-Man: Homecoming and The Fate and the Furious; Ralph Porter, who has shared stages with comic talents including Kevin Hart, Tiffany Haddish, Sinbad, George Lopez, Tommy Davison, Mark Curry, and Tony Rock; Ron Josoi, a Showtime veteran who regularly performs in Canada, the United Kingdom, Scandinavia, the Caribbean, Asia, the Middle East, and Australia; and Tashona Smith, who has been featured in the International Lady Laughs Comedy Festival, and a talent who proudly states that the New York Times called her “Charming, Tantalizing … Confusing.”

“We are extremely excited to be a part of this event,” said Jack Ligon, general manager for the Xtream Arena & GreenState Family Fieldhouse. “We all know firsthand how difficult the entertainment industry has been impacted by the pandemic, and it is great for our [Spectra] venues to come together during these times to provide our guests this opportunity.”

The February 14 Saving Our Job$ Virtual Comedy Festival will begin at 2 p.m. and conclude at 11 p.m., with constant live comedy taking place during all nine hours. Virtual admission is $20 for a live ticket or $40 for a standing ticket that allows viewers the option to watch the broadcast at any point through Valentine's Day 2022. The festival is recommended for audiences 18 and older, and for more information and tickets, visit XtreamArena.com.