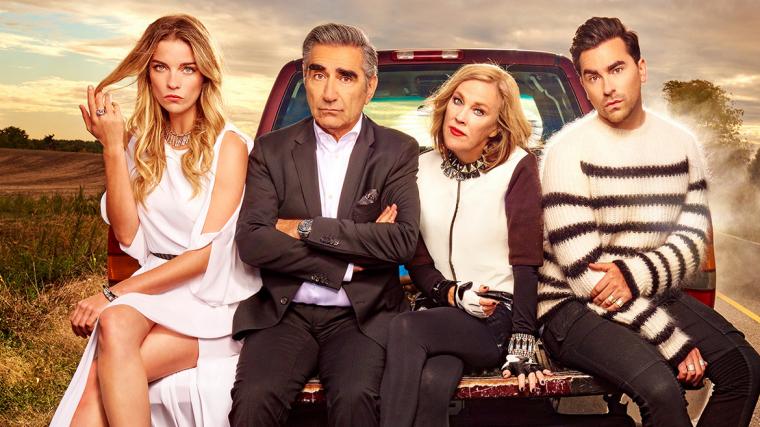 One of the most beloved sitcoms of recent years, and the record-holder for the most Emmy Awards won by a comedy series in a single year, Schitt's Creek will be the subject of a special trivia night at The Tangled Wood, with fans of the show asked to bring their knowledge – and maybe their finest black-and-white attire – to the Bettendorf venue on February 23.

A Canadian sitcom created by father and son Eugene and Daniel Levy that aired for 80 episodes and six seasons on CBC Television, Schitt's Creek follows the formerly wealthy Rose family's trials and tribulations. After Rose's business manager embezzles the family business Rose Video, the family loses its fortune and relocates to Schitt's Creek, a small town they once purchased as a joke. Forced to live in the town's only motel, Johnny Rose (Eugene Levy), his wife Moira (Catherine O'Hara), and their adult children David (Daniel Levy) and Alexis (Annie Murphy) must consequently adjust to life without money – but with each other

The series, which ran from January 13, 2015, to April 7, 2020, was first sold to CBC Television in Canada and secured final funding to start production in its sale to PopTV in the United States, where it debuted on February 11, 2015. Although limited in popularity throughout its first few seasons, the series' appearance on Netflix after its third season is credited for the show's sudden rise in stature, attributed to the "Netflix bump" and a dynamic social media presence. Schitt's Creek received critical acclaim from the start and quickly garnered a cult following, and became the first Canadian comedy series to be nominated for a Critics' Choice Television Award for Best Comedy Series. It also received a total of 19 Primetime Emmy Award nominations, two of which were for Outstanding Comedy Series in the show's final two seasons.

At the 72nd Primetime Emmys this past September, Schitt's Creek's final season swept all seven major comedy awards (series, writing, directing, and four acting categories), the first time that any comedy or drama series received all seven. Daniel Levy received a record four Emmys for acing, writing, directing, and producing, and the series also set a new record for most Emmy wins – nine – by a comedy series in a single season, beating The Marvelous Mrs. Maisel's 2018 record of eight. The show is currently nominated for five Golden Globe Awards and five Screen Actors Guild Awards, with the series and all four of its central performers recognized for both.

Schitt's Creek Trivia Night begins at 7 p.m. on February 23, participation is free for the all-ages event, and cash prizes will be awarded. Guests are asked to wear face masks when not seated at their tables, and more information on the evening is available by calling (563)949-1000 or visiting TheTangledWood.com.