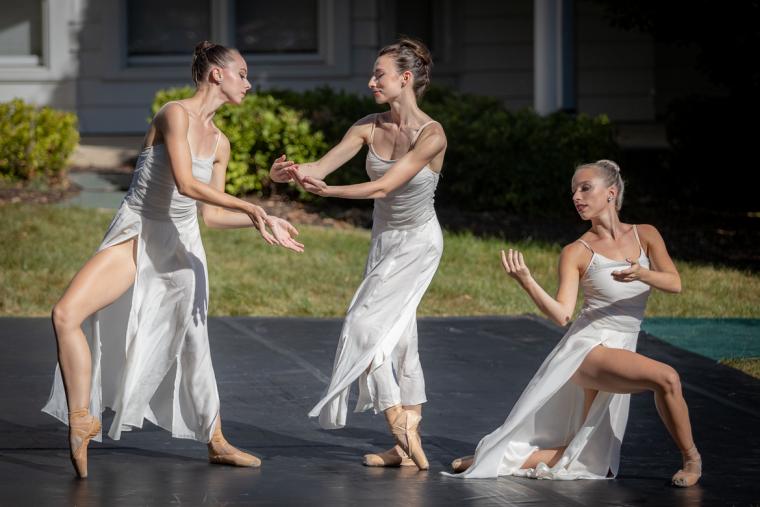 Ballet Quad Cities' "Ballet on the Lawn," August 30 at the Davenport Outing Club

Joedy Cook, founder and CEO of Ballet Quad Cities in Rock Island, discusses the company's operations during this period of social distancing. We previously spoke on March 25, and again on Sunday, August 30 … roughly four hours before her company performed its first post-pandemic performances of Ballet on the Lawn at the Davenport Outing Club.

Ballet at the Outing Club

We are partnering with the Outing Club for the first half of our season this year, and it's a perfect place for dance outside. We just had our dance floor [for Ballet on the Lawn] delivered last night. This is the very first time that we're trying something totally new: We've had a floor delivered from triple-A that is like a hard rubbery plastic, and it all goes together like a puzzle. So we have that positioned exactly where we wanted, we rolled out our Marley floor, which, for people who don't know what that is, is this very, very expensive portable floor that we have to put down on whatever surface we perform on every time we perform. So we rolled that out so it could rest all night, and we went back this morning to find that it was covered in dew (laughs). But after it dries again, the next step to the floor process is to tape it all down with a very expensive tape. It's quite a process when we dance outside. But we have to do that special flooring even when we're inside. The Marley floor makes it safe, and that is one of the most important things we do at Ballet Quad Cities is ensure our dancers' safety.

It's 100-person capacity outdoors at the Outing Club, and going to see today if there's actually room for more than 100. But we wanted to be cautious. The 2 o'clock and 6 o'clock performances are sold out, and there are eight tickets left for the 4 o'clock, and it's so perfect that we feel confident that this is the way it's supposed to be. I mean, it's about time that something goes right this year. (Laughs.) But I always see the glass half-full, never half-empty. And right now, for us, all is well in the dance world!

On Your Toes, Act 2: Slaughter on 10th Avenue

That is the little mini-ballet that we're going to do on September 20, and we'll be doing that at the Outing Club, too. It's from the musical On Your Toes, and we are going to kind of turn that whole ballet into a take on [notorious Rock Island gangster John] Looney and his life right here in the Quad Cities. So it's going to be one of those gangster, good-guys, bad-guys, ladies-of-the-night things. (Laughs.)

We haven't even decided on who's choreographing it, because, of course, we're in the process of putting together a brand-new season with, obviously, a brand-new venue – and also having to do things very cautiously, step by step, because we're never sure what the next day will bring. So we just sat down yesterday after we went to the Outing Club and set up – we went back to the studio and laid out the program for the 20th. So we're not sure who's going to choreograph it yet. But it's going to be a really fun piece. And because it's a narrative with a gangster in it (laughs), both Courtney [Lyon] and Emily [Kate Long] are probably going to want to work on that piece. But we'll see.

Dracula is still on our radar screen, and if we can do a virtual Dracula, that'll be in October. It would be done by the two videographers who recorded last year's Getting Together and put together an awesome performance. [Lead dancer] Domingo Rubio, of course, would be able to come back for that, as well ... though probably through Zoom.

What we've found is that so many people ask about Dracula, and if we're going to do Dracula – and it is pretty funny, because of course we can't do Dracula outside. (Laughs.) But it's become a very, very popular performance. People love Dracula, they've begun to get to know Domingo. When he is in town, he spends so much time building relationships with people in our community that they feel he's a friend. 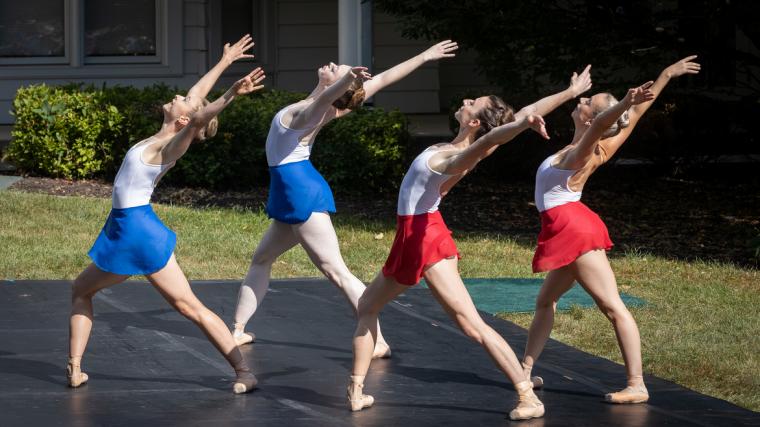 Other Fall Events and Possibilities

Another idea I'm kicking around for the fall has a tailgate/football theme. Because as of now, I think, there are no football games to see. And people around here love their football. So it would be a Hawkeye, Illini, football-themed, tailgate, fun-food event where you'd wear your team's jersey proudly and come support your communities and teams … and Ballet Quad Cities. (Laughs.) But dancers are athletes, and it would be really fun to even have a few football players around for that, because I think our dancers are stronger than they are. (Laughs.) Our focus right now is just on positive, high-energy entertainment, period. No statements about anything.

We're also opening for a couple of the bands playing Thursday nights at Schwiebert Park in September. And we've just started looking into virtual programming for the fall. What we did get, which is pretty awesome, is a $5,000 grant from the Illinois Humanities to make virtual presentations of five of our best-known Dance Me a Story books. And those will go out to schools, preschools, home-schoolers – anywhere kids need a diversion. To give them a chance to read and connect with a dancer, connect with a face, connect with a smile.

Our new book that we're going to dance this year is called Ruby Finds a Worry, and it lets whoever interacts with us know that it is okay to have a worry. And so while there's reading and dance, we also discuss worry. What it means, how to resolve it – and of course, at the end of the book, it tells you that if you discuss your worry with a friend or someone special, it helps your worry go away. It's a great book. It's designed for elementary [students], but I said, “I need to read this every day.” (Laughs.) Just to get rid of my adult worry.

The whole concept for us, from now until December, is just to keep our ballet company out in the community, doing good things, letting people know that we're still around. And while we're very concerned for children, we're also very concerned for the elderly. We did a lot of programming in nursing homes and senior centers, so we're going to see if we can somehow reconnect with the seniors, as well – bring them some really fun music and movement to kind of get them out of their world, whatever that world now is.

So for the fall, we'll just be popping in and out of venues and sites whenever it's appropriate and whenever we get invited.

I'll tell you, our dancers are so happy to be back here. They love our community. This is a young group of dancers that we hired in last year, and once they got here, they immediately acclimated to our community. There's something special here that has drawn them, and even though we could not offer them that full 28-week contract, they loved it here so much they all came back for the new season.

And you can tell in the way they're dancing that they are thrilled to death to have a job, because most dancers in the United States of America right now – and all over the world – don't have a job. They're unemployed. So when you see them on-stage and see them dancing, what you see are some joyous, joyous dancers.